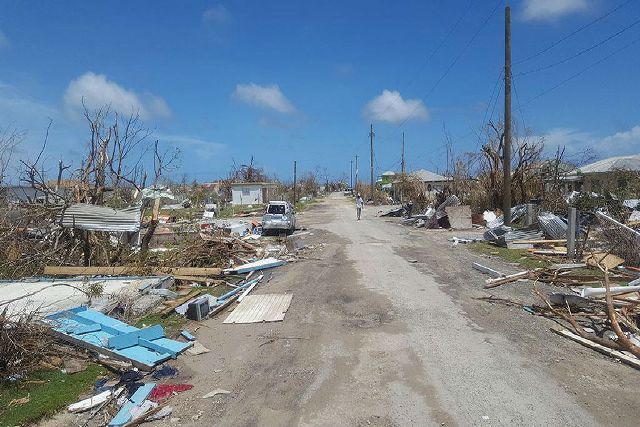 In part, it observed that while the overall frequency of the Atlantic storms the Caribbean experiences may decrease in the future, there is an 80 per cent chance that as the century proceeds the number of devastating category 4 and 5 storms will increase.

It warned that although globally, sea levels are forecast to rise on average by 26-82 cm (10-32 inches), this figure could be higher in the northern Caribbean by 25 per cent over the same period posing a significant risk of damage by storm surges to settlements, infrastructure and biodiversity.

Moreover, the study’s authors noted, Caribbean sea-surface temperatures will likely be uniform across all seasons, warming to more than 28 ºC with negative year-round implications for hurricane intensity and early season rainfall. There will also be a tendency towards more dry spells, increasing risks from drought, and extreme rainfall events.

Seeking to quantify what this means for the region’s future economic development, it provided estimates, on an island by island basis up to 2025, of the likely negative impact on Caribbean GDP of inaction.

Sadly, the horrific damage to the regional economy, to say nothing of the suffering caused to millions of Caribbean citizens by Hurricanes Irma and Maria, demonstrates the science behind the report, the importance of its recommendations, and the truly existential nature of the threat that now faces the region.

Rightly, the present focus is on relief and recovery, but beyond vital short-term responses and the provision of immediate external support there is a need to take a long-term considered view about the policies needed to address this.

The first point to make is that resilience is about more than repairing infrastructure. It is about defending the economic contribution of the fifty per cent of the Caribbean population, and the majority of the region’s productive and services enterprises, infrastructure and fragile ecosystems, that lie within 1.2 miles of the coast. This suggests not just protecting the built and natural environment along coastlines through investment in infrastructure, but policies that ensure all new structures, investments and housing are hardened in ways that sustain future economic development.

Unfortunately, this is easier said than done as the costs are likely to be enormous. The German-based Centre for Disaster Management and Risk Reduction Technology (CEDIM) has said that from Hurricane Irma alone, the region, excluding Cuba, will likely experience absolute losses of at least US$10bn making it the most damaging recorded Caribbean storm ever.

This suggests that what is required is a loud, long-term, co-ordinated strategy that constantly and consistently reminds others, including the US and China, about the importance of the region being an early beneficiary of the US$100bn UN climate change fund; the mechanism meant to enable developing countries adapt to and mitigate the effects of global warming. There is also a need for significantly increased levels of international support for the Caribbean Catastrophe Risk Insurance Facility, the regional disaster fund for Caribbean governments established in 2007.

Secondly, there is the need to address a more fundamental problem:  the way in which the Caribbean is now categorised when it comes to development assistance. To argue that the Caribbean, Haiti apart, is ineligible for such support because it consists of middle ranking developing economies, is to miss the point. Most Caribbean islands are small, have significant levels of poverty as well as wealth, rely on one or two industries, have high levels of debt, and a consequent incapacity to be able to rapidly restore economic growth after a natural disaster.

If the UN sustainable development goals and development priorities are to have any real meaning for small island developing states, the existing criteria for eligibility needs adjusting to account for their smallness and vulnerability.

This too will not be easy to achieve. It requires the world to find a reason to reach a consensus that small islands are different at just the time when the US President is setting aside inter-dependence, suggesting to an almost silent UN General Assembly that countries should take responsibility for themselves.

Despite this, Caribbean governments need to continue to remind the world in all fora that it is not the Caribbean that created climate change, rather it is the failings of others that have placed the region in increased jeopardy.

The third is that much greater attention is needed to try to ensure that a larger proportion of the built environment is robust so that damage is less likely to be catastrophic.

This requires an increased focus on regulations, and the long-term hardening of infrastructure to withstand category 5 storms, especially when it comes to key utilities, facilities such as hospitals and airports, shelters, harbours, and sea defences.

Fourthly, more thought needs to be paid to civil defence programmes. Positive experience already exists within the region. Cuba, moved 1.7m people to safety before hurricane Irma. It has a developed, well-co-ordinated system that addresses issues before during and after a hurricane.  This deserves study, adaptation and adoption by others.

Fifthly, in the aftermath of any major storm there is a need to better co-ordinate short, medium and long-term messaging priorities. There are many examples after hurricane Irma struck where governments were stressing serious damage to economic infrastructure and hardship, while the tourism sector, for understandable commercial reasons, were saying all was well and they would be opening as normal for the coming season.

Sixthly, it should be more widely recognised that visitor perception and messaging have become a critical component of the future success of the regional economy. Throughout Hurricane Irma’s course, visitors’ use of social media drove the international news agenda, downgraded the far greater suffering of islanders, and rightly or wrongly, created concerns about the long-term security of some destinations.

And finally, there is a need to address the damaging impression of the region created by the consular and other failings of some countries and their tour operators, by agreeing jointly, time-lined evacuation protocols.

Climate change is real, and likely to be lasting. It requires sustained leadership and long-term planning if the economic and human impact of future disasters is to be minimised.

Hurricane Irma in quotes and pictures

Hurricane Maria in quotes and pictures