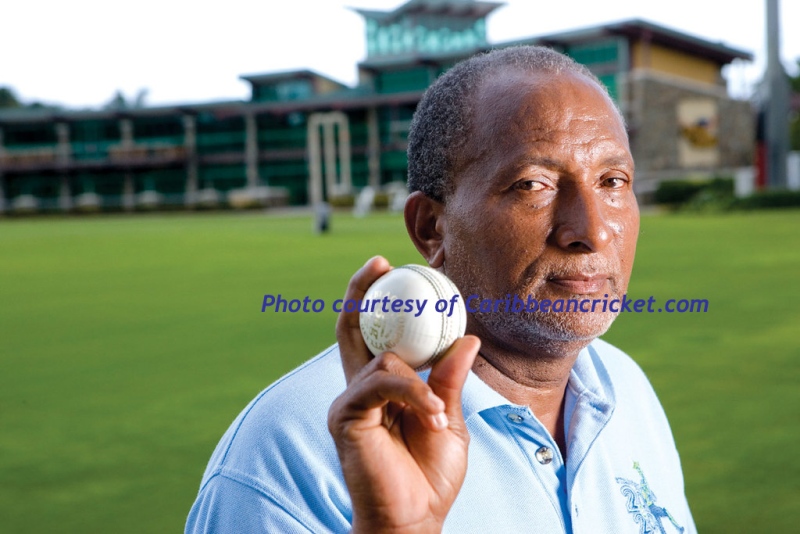 “The weather was the number one problem for me when I arrived in England,” Andy Roberts told Caribbean Intelligence as he remembers his arrival at Heathrow Airport 50 years ago.

“When the first breeze struck me, well, I just wanted to get back on the plane. I felt cold which I’d never felt before in my life!”

Within four years of arriving in England, Roberts slowly acclimatised to the British weather, made his debut for Hampshire County Cricket Club and West Indies, and was a World Cup winner.

Although Roberts achieved his career success as a fast-bowler, as a young player in Antigua he regularly displayed his talent as a batsman. “I always bowled fast, but I was also a good batsman and during one year I topped the national averages for my clubs – Urlings and Rising Sun”, says Roberts.

In 1972, Roberts and Viv Richards arrived in England from Antigua to attend the Alf Gover Cricket School, south London. The trip to England was organised and paid for by a group called the Antigua Voluntary Coaching Committee. The group raised funds by organising barbecues, second hand sales and dances in Antigua.

“At the time, I felt I was an accomplished bowler and I was playing for Leeward and Combined islands. So, you can see how far I was into my career before I met a coach who told me anything”, Roberts recalls.

“I had no formal coaching, and everything I did up to then was self-taught and by watching the older cricketers play in the village. I read books to see how people gripped the ball and just did it myself.

Danny Livingstone, a fellow Antiguan, was playing for Hampshire. The chairman of the Antigua Voluntary Coaching Committee knew Livingstone in Antigua. He wrote to Livingstone and asked if someone at Hampshire could take a look at Roberts at Gover.

“Richard Gilliat, who was the Hampshire captain, and a Hampshire committee member, came to watch me at Gover and were impressed with what they saw”, Roberts told Caribbean Intelligence.

“Hence, the contract negotiations started from there. It was arranged for me to come back to England the following year to play for the Hampshire second eleven”.

In 1973, Roberts made his first-team debut for Hampshire v West Indies in Southampton. The West Indies were on tour, preparing to play England, and played Hampshire in one of their pre-Test matches. This provided Roberts with an opportunity to impress the Hampshire and West Indian hierarchy.

He adopted a matter-of-fact approach to the contest. “For me, it was just another game against another opponent. But, I wanted to show that I could be just as good as them, and from this first game a lot of them were impressed with how fast I was bowling”.

Stephen Camacho, a West Indian batsman, was struck in the face during the match from a delivery from Roberts. Camacho left the field injured and didn’t play another Test match for the West Indies. Despite this, there were no hard feelings between the two. Camacho and Roberts both lived in Antigua until Camacho died in 2015.

In 1974, Roberts played his first test match for West Indies v England in Barbados. He was the first Antiguan to represent the West Indies. Richards, who was establishing himself at Somerset County Cricket Club, was inspired by Roberts to become the next Antiguan Test player.

Roberts remembers how difficult it was to achieve this ambition.

“Coming from Antigua, I learned from early that I couldn’t just be as good as (Vanburn) Holder, (Keith) Boyce and (Bernard) Julien. I had to be better. I had to try not just twice, but three or four times as hard. Because coming from a smaller island, we were always the last to come and the first to go. That’s how it was in those days.

But, Sir Frank Worrell prophesised that the future of West Indian cricket would come out of the islands, because he travelled around the smaller islands and saw the natural talent we had".

Roberts is usually packaged alongside Michael Holding, Joel Garner, Colin Croft and, later, Malcolm Marshall as part of a supremely talented and fearsome West Indian fast-bowling attack during the 1970s and 1980s.

However, Roberts has often been described as having a unique approach. He was different from the rest - a lightning quick and skilful fast-bowler with a deceptive change of pace. Clive Lloyd, who captained Roberts on many occasions for the West Indies, said that he never played with a more intelligent bowler.

“I personally didn’t play cricket just to perform. I played to win and Clive realised that I worked batsmen out. From time to time, I would try something and he wasn’t pleased,” he told Caribbean Intelligence.

As a captain, Clive wanted to revert to his ideas but I always ended up proving him I was right. My focus was on winning and as long as you do it legally, fair and square, you have to try everything”, Roberts explained.

Roberts played 47 Tests for the West Indies and took 202 wickets. In 1975, he was one of the five Wisden Almanack cricketers of the year. In the same year, he won the inaugural Cricket World Cup tournament in England with the West Indies. In 2009, Roberts was inducted into the International Cricket Council (ICC) Hall of Fame.

However, his most memorable achievement was from 1979 to 1980 in Australia. “Beating Australia in Australia when we beat them 2-0. Because the West Indies had never beaten Australia in a Test series in Australia prior to that. So, that was the highlight of my career,” Roberts says proudly.

The next West Indies v England Test series starts on 8 March at the Sir Vivian Richards Stadium, Antigua. Since retirement from first-class cricket in 1984, Roberts has assisted and supervised with the preparation of pitches for Test matches at the nearby Antigua Recreation Ground. He was also a member of the West Indies team selection panel from 1993 to 1995 and in 2006.

Roberts shared his thoughts about the upcoming series in the Caribbean.

“I’m not sure how the series will go because, in a way, both teams will be starting from scratch. England has a number of new players, but (Jimmy) Anderson not being in the Caribbean doesn’t make a big difference.”

He told Caribbean Intelligence: “The West Indies are struggling and still trying to come to grips with Test cricket. I think we (in the Caribbean) focus far too much on the shorter form of the game instead of the longer game. I believe that you have to become a good Test player in order to be a consistent one day player”.

Colin Babb is the author of 1973 and Me: The England v West Indies Test Series and a Memorable Childhood Year (Hansib).

Making sense of the rise and fall of West Indies cricket

The 'grovel tour, the diaspora and 40 years on

An audience with Jimmy Adams