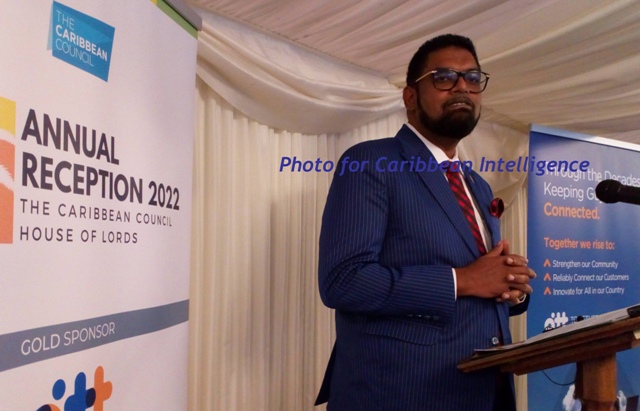 Guyana’s President, Irfaan Ali, visited London at the end of April 2022 with an outline of a different approach to his nation’s recently acquired oil riches.

He explained to UK government and business representatives and climate change watchers that he sees the huge oil and gas finds as a vehicle to improve the wider productivity and education of Guyana, as well as a springboard to deeper investment in his country and the wider Caribbean.

He told a Caribbean Council for Europe reception for business people and parliamentarians at the House of Lords that climate change and the Covid pandemic crises had pushed Caribbean leadership on to a new path of self-sufficiency and an interest in non-traditional investment.

In introducing his keynote speaker, Lord Bruce put the Guyanese experience in the context of Aberdeen in the late 1960s, as the oil wealth experience had created a similar “buzz” for the Scottish city.

In his feature address, President Ali made it clear that Guyana’s new oil wealth was important to open up longer-term development for his country and the Caribbean region. “What we’re trying to do with the revenue is open up the infrastructure landscape,” he said.

The Guyanese leader outlined a perspective on his country’s oil wealth (three new oil finds were announced as he flew to London) as funding a transition to a non-oil wealth status. He added: “We don’t see ourselves as a country which will be driven by oil and for oil.”

President Ali spoke of non-traditional registrants for investment opportunities and a “new mood” from countries and business people in the Middle East for investment in Guyana and the Caribbean.

The Guyanese leader outlined a repositioning of the Caribbean, not as a provider of votes at multilateral meetings, but as a launch pad for investment and trade. He pointed out that CARICOM had market access to 220 million people through its trade agreements with parts of Latin America and Cuba.

He said that a May agricultural investment forum was already fully subscribed, with the new attendees being “non-traditional persons” and large agricultural producers from the Middle East. He spoke of “a new mood” for these countries to invest in Guyana and the Caribbean. “They are the ones who are coming aggressively,” he told the UK business representatives.

Earlier in his visit, he told potential UK investors that the Caribbean’s development was now based on strengthening traditional sectors and building new ones. On the much-reviewed growth of Chinese investment in the Caribbean, he had told an investment seminar in London that “many people ask sometimes why Chinese investors find the market faster than anyone else; well, I can tell you from our humble experience, their aggression is far different.”

President Ali’s remarks in London follow the post-pandemic surge in meetings with African leaders, agreements and exchange visits between African and Caribbean teams and Caribbean delegations attending trade and investment fairs in the Middle East.

The Guyanese leader pointed out how the COP26 “end of oil” narrative had changed to the “pump more oil” narrative following the Russian invasion of Ukraine. During his visit, President Ali met UK Prime Minister Boris Johnson in a session headlined by Guyana Newsroom as UK eyes Guyana’s oil supply in wake of Ukraine/ Russia fallout.

“It’s a very complex world we’re living in and we understand that complexity,” the Guyanese leader told the Caribbean Council reception.

He described Guyana’s rapidly growing energy sector as providing a “long enough future to give us the opportunity to advance other sectors”. Within this oil-rich period, he outlined his strategy for “One Guyana” – a “one-nation framework” which would build up the country’s infrastructure, governance, employment and skills. He outlined plans for developing freshwater investment, building new hotels, processing rather than growing hemp, creating hi-tech jobs and opening up new earning potential. He touched on plans to teach coding in schools and build a knowledge economy which would be the “new Guyana”. Other plans included the development of a deep water port [talks are taking place with Abu Dhabi] which would be of use also to neighbouring Suriname and Brazil. President Ali said he had a meeting scheduled in two weeks’ time with Brazil’s President, Jair Bolsonaro.

If anybody had expected the leader of a newly-oil rich country to talk solely about oil and gas, they would have been mistaken. President Ali spoke of his desire to reduce energy use in Guyana and not forget the promises of cutting carbon emissions in the long term.

He also stressed his long-term low-carbon strategy, with 87% of the country still given over to forest (“the size of England”, he explained) with a value of US$195bn.

He made it clear that oil was the resource to facilitate the growth of the real resources, as he sees it, of Guyana – the “hospitality and humility” of the Guyanese people.

While his UK visit focused on energy, investment and economic development, the spectre of the Caribbean’s growing calls for reparations for slavery hovered in the background. During an interview with Sky News, President Ali said that CARICOM wanted a "stronger relationship” with the UK and that he hoped Britain would pay more attention by "working with the small island developing states".

"There is a recognition that there needs to be a reset of the relationship in a way that gives more prominence to the Caribbean, Guyana and the UK.  And that is happening, that is a work in progress,” he told the UK broadcaster. On slavery reparations, he described an “immense” generational suffering which had produced a lot of wealth. "Not a simple apology, it has to have great depth and meaning. But in my view and looking at the last announcements, I think they're heading closer to that position," he told Sky.

Following his series of meetings with UK business and media, President Ali and his delegation met Prince Charles and also held a meeting with the Guyanese diaspora.

During this flurry of UK meetings, the infrastructure for his one-nation Guyana was being laid back home. The board of the country’s new slimmed down Natural Resources Fund (NRF) – aimed at stripping ministerial influence from the spread of oil wealth - was announced. Appointees include former University of Guyana pro-Chancellor Joseph Singh, UK MP David Lammy (who has Guyanese heritage) and Guyana’s UN permanent representative, Carolyn Rodrigues-Birkett.

As President Ali had outlined during his House of Lords reception address: “What we’re trying to do with the revenue is open up the infrastructure landscape.”

Debbie Ransome is the former Head of BBC Caribbean and the Managing Director of Caribbean Intelligence.

Oil and so much more: Attracting investment for Guyana