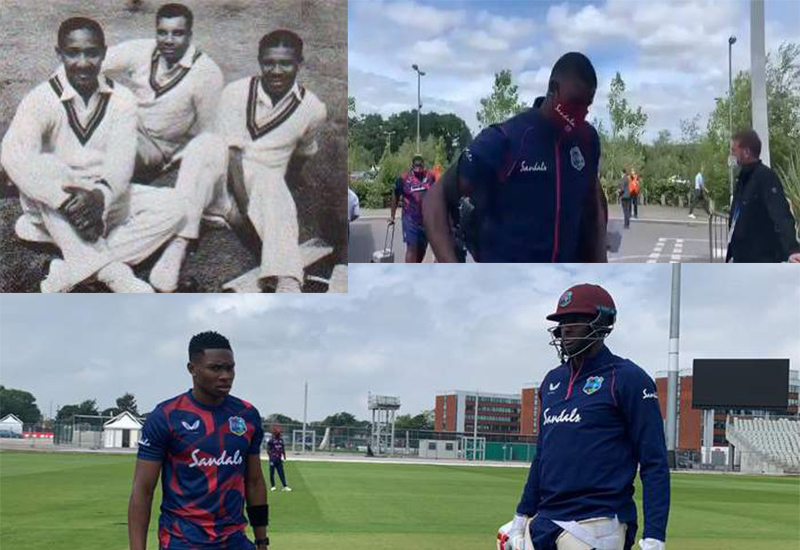 On 9 June, the West Indies arrived in England for their re-arranged three Test series. The team arrived without Darren Bravo, Shimron Hetmyer and Keemo Paul, who declined their invitations to tour. All three tests, the first at The Ageas Bowl ground in Southampton on July 8, followed by two at Old Trafford in Manchester, will be played ‘behind closed doors’ at bio-secure venues with no spectators because of the COVID-19 pandemic.

An essential feature of pre-series tour preparations in England should be warm up fixtures against county teams. Instead, to ensure the safety of players and officials before and during the series, the West Indies have been restricted to practice matches between themselves and confined to their hotel in the Old Trafford cricket ground complex.

In recent England tours, limited time to acclimatise to English conditions has, arguably, helped to make the West Indies easier to beat on English soil. However, with both teams starved of competitive international cricket and regular practice in recent months due to the COVID-19 pandemic, this could contribute to the series being more evenly contested.

During this series in the Caribbean, the West Indies displayed an encouraging combination of determination, resilience, skill and a firm belief in each other. They were impressively captained by Jason Holder, who led from the front with a double hundred in their first Test 381-run win in Barbados.

Holder arrived in England for the 2020 series as the number one Test all-rounder. One of the close contenders for his number one all-rounder slot is England’s Ben Stokes. The ‘contest’ between Holder and Stokes will be keenly observed by supporters of both teams during the series.

In sharp contrast, the West Indies have not won a Test series in England since 1988. One of the main reasons for the deteriorating relationship between some of the Caribbean diaspora in Britain and West Indian cricket has been this dismal sequence of performances and results.

A collection of moral boosting performances this summer in England would perfectly honour the memory of the recently, sadly departed Sir Everton Weekes. The last of the legendary ‘3 Ws’ (Everton Weekes, Clyde Walcott and Frank Worrell) batting force to pass away. 70 years ago, at Lord’s, Weekes helped to create history as part of the first West Indian team to win a Test match in England.

Whether the West Indies can produce a sequence of improved results in extraordinary circumstances remains to be seen. However, after a long wait, for many cricket supporters and casual observers of the game, the West Indies team’s agreement to tour England is one of the most significant moments in international sport this year. Regardless of which team wins the Test series.

Colin Babb is the author of 1973 and Me: The England v West Indies Test Series and a Memorable Childhood Year which is available now.