The growing allure of the Black pound 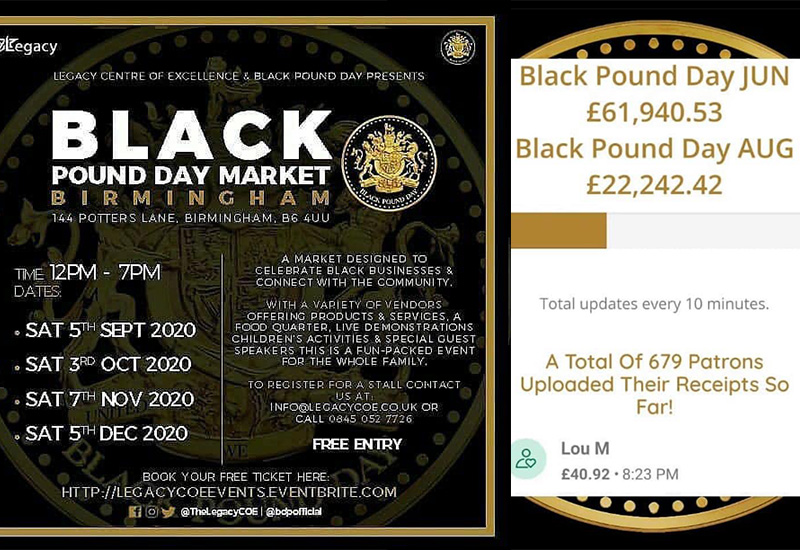 The value of the Black Pound is rising to prominence. Today, everybody knows when something is trending once it has a hashtag and a movement. And, that’s exactly what #blackpound has achieved in 2020.

Economists and writers on Caribbean and African issues in Britain have referred to the Black Pound in the past. However, in 2020, following the growing focus on Britain’s Black community as a by-product of  #BlackLivesMatter, the spending power of that community seems to be finally coming into its own.

At the start of the year, a project called Black Pound Day was launched. Following the UK’s summer pandemic lockdown, the first of the project’s major “get out and spend” messages in June 2020 hit just the right note, giving people a welcome excuse to leave their homes and spend at community shops. Food venues, product websites and community retailers all benefited as people showed off their purchases with a post-lockdown, post-BLM glow under the hashtag #blackpoundday.

According to Sky News, the June call to arms brought in £100,000 in revenue for black-owned firms. The Black Pound Team pressed forward their advantage, calling on people to shop in person or online at black-owned businesses on the first Saturday of each month.

By early October, the momentum grew further with the onset of Black History Month in the UK. Black social media once again resounded with the #BlackPoundDay experience.

So powerfully attractive has the brand of attracting the Black Pound become that one gym in Luton got it spectacularly wrong in October by promoting a “12 years of slave” workout (yep, with the slogan: “Slavery was hard and so is this”). The step too far in appealing to black consciousness became national news in the UK. The gym pulled the ad within hours and apologised. However, the fact remained that somebody thought of the idea, in the wake of growing attention being paid to how Black Britons spend their money.

In early October, another indication of the rise of the Black Pound came with the arrival of the UK’s first Caribbean bank. Jamaica National (JN) launched in the UK on 8 October – a Caribbean-based financial institution with a full banking licence from UK regulators. JN Bank is nothing new in Jamaica. The Jamaican National Group grew out of Jamaican building societies in the 1800s to become a bank with overseas offices in the US, Canada and the UK, offering affiliated insurance, loan and money services. JN has had a long-term prominent role in Britain’s Black community, including a board role managing Britain’s only Black newspaper, The Voice and leading on numerous Black British community initiatives.

The new JN Bank UK will initially offer retail savings and personal loan products digitally, but said that it planned to operate its first bricks and mortar branch in Brixton, south London, because of its strong community ties there. JN Group chief executive Earl Jarrett said: “JN Group is already well-known among the Caribbean community in the UK for our fair value financial products and services, and a culture deeply rooted in our mutual heritage.”

In launching the bank on 8 October, Jamaica’s Prime Minister, Andrew Holness, described JN Bank as “a financial bridge to Jamaicans and their families overseas” for decades. The British High Commissioner to Jamaica and the Bahamas, Asif Ahmad, described the development as “a big step for the country as it integrates into the global financial system and it is also a huge opportunity for the Caribbean to find its gateway to the world through London and the financial system that we are connected to”. Mr Ahmad said that the new UK bank was not just about linking the diaspora to Jamaica, but also an opportunity for Caribbean banks to use JN as a corresponding service. At the launch, he urged other banks in the Caribbean to fall behind the JN initiative as a Caribbean lifeline to the global banking system.

The official Black Pound Day website continued in October 2020 to promote economic empowerment and “conscious consumerism”. It encouraged people to replace their usual purchases with products from Black-owned businesses once a month.

Campaign magazine said that research in December 2019 from a team called The Black Pound Report found that 66% of black, Asian and minority-ethnic people had felt dissatisfied with their representation in UK TV ads. One of the partners of the Black Pound Team project, Ogilvy Roots, said that the venture aimed to change this narrative, using the strength in numbers. Ashleigh Johnson-Palmer, who chairs Ogilvy Roots, said: “Supporting black-owned businesses and investing in the Black community can help shift the necessary narratives, attitudes and structures to ensure their independence and prosperity. Those are especially important in facilitating the fruitful lives Black people deserve."