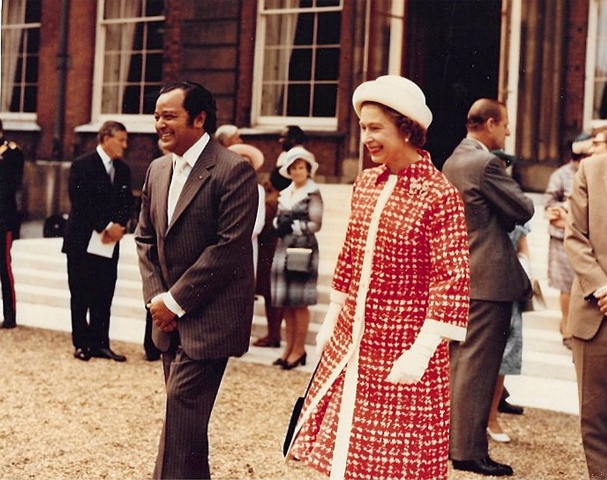 Sir Shridath "Sonny" Ramphal is the longest-serving Commonwealth Secretary-General - 1975-1990. This tribute is with the kind permission of the author.

[Photo: Shridath Ramphal at his first Commonwealth Day reception in 1976 with The Queen at Marlborough House. Photo permission of the Sonny Ramphal online public documents website]

Queen Elizabeth was a queen beyond Britain.

As  Head of the Commonwealth, In particular, her sense of caring for its unifying principles and her dutiful commitment  in advancing their discharge, made her a global  asset. For that Commonwealth of 54 countries her leadership rested  not in allegiance but affection.

Having served closely as Commonwealth Secretary General for 15 years, I attribute the Commonwealth’s survival over the years of UDI in Rhodesia and apartheid in South Africa greatly to the Queen’s deep caring for the new Commonwealth she had inherited, and her unqualified sense of duty. Few remember that it was the Queen who gave Marlborough House - her Grandmother’s home - as a Commonwealth Centre. Such was her caring for her new wider family where his week there will be remembrances of friendly country visits on every continent.

The whole world has benefited from Queen Elizabeth’s life being ‘long’, in the context of her vow of service as her reign began.

From 2014: A Caribbean man for all seasons

2014: Preserving the Caribbean's recent past

2014: Who will write today's Caribbean history?