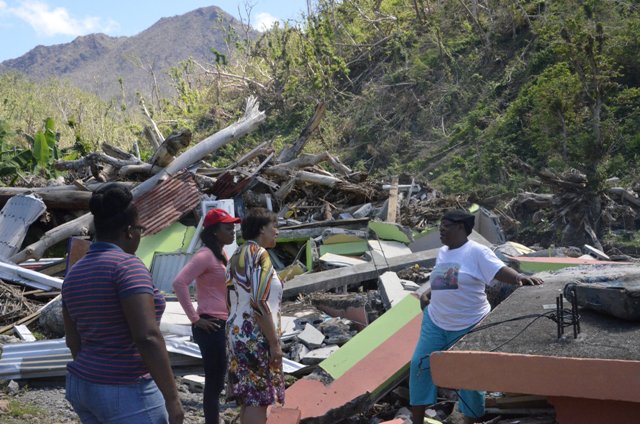 “The world must do better,” the Dominican leader said after outlining the devastation meted out to his country by Hurricane Maria in September.

The message was not one of “pity us” but that climate change will affect all of us in the long term – but small island states are in the front line now.

The Dominica-born Commonwealth Secretary General Patricia Scotland described the devastation she had viewed during a recent visit in an interview with Caribbean intelligence©.

“The most horrific thing you’ve ever seen,” she said, describing houses which had simply disappeared in the hurricane, leaving mere dents in the road. She relives the experience in a Commonwealth video.

On global initiatives to help hurricane-hit countries after the mainstream media attention wanes, Baroness Scotland said: “Please don’t forget us, because it’s something that happens to every Commonwealth region and it’s coming to you some time soon.”

“Don’t let it go off the boil, because we never know who’s next,” Baroness Scotland said.

The Commonwealth has been putting one of its initiatives into immediate action following hurricane season 2017.

The Commonwealth Finance Access Hub, launched in 2015, allows experts to be placed on the ground to help battered countries fast-track their access to and applications for international aid and expertise. http://thecommonwealth.org/climate-finance-access-hub

Baroness Scotland told Caribbean Intelligence© that the initiative, which actually started its work in December 2016, had meant that the Commonwealth was not “scrambling” when the hurricanes hit the Caribbean in September 2017.

Dominica has already requested a Hub adviser on the ground. It means that someone will be sited in Dominica, as Baroness Scotland describes, working “hand-in-glove with them in crafting the applications”.

An obvious question is why the Commonwealth has a role when there is a plethora of global aid agencies, charities and a number of UN emergency agencies ready to roll in times of disaster.

“All of us - Sierra Leone, Pakistan, Bangladesh, Vanuatu... the whole of our Commonwealth has had sad experiences,” Baroness Scotland told Caribbean Intelligence©, adding that this allowed for “pooling our experiences”.

In a nutshell, it means that the people in charge of repairing Dominica can learn from those who went through similar experiences when flooding devastated Bangladesh and so on.

The Commonwealth also used the Bonn COP23 meeting to unveil a new online tool to help lawmakers tackle climate change legislation, as well as a resource guide for what it calls “youth-led action” to tackle climate change. None of these initiatives are new, but the Commonwealth feels it has a more committed audience at the end of a year marked by Mother Nature’s damaging power in Vanuatu, Bangladesh and Pakistan, followed by the hurricanes in the Caribbean.

The hurricane season has also strengthened the hand of those in the Commonwealth, the UK government and overseas territories on changing rules on official development assistance (ODA).

The rules, which exclude middle income countries and territories from immediate aid assistance, have been in the sight of reformers for some time.

However, the Organisation for Economic Development (OECD) has finally agreed to revisit these rules after territories including the British Virgin Islands and the Turks & Caicos (TCI) were denied ODA because of their economic status.

“You can be a middle-income country or a rich country, but when a hurricane of the magnitude of Irma or Maria hits them, you are penniless,” she said, adding that such rules needed to look at the reality of what had happened to a country or territory.

She told Caribbean Intelligence© that the 2017 hurricane season had strengthened the case at the OECD table when it came to calls to “refashion” the discussion on middle-income and rich-country status and access to aid following disaster.

“It’s tragic that it’s done it this way but it has,” she said.

Help to build back better

As Caribbean Intelligence has reported, the determination of Caribbean countries hit by Hurricanes Irma and Maria to not only rebuild but build better has become the mantra of the post-hurricane strategists.

Baroness Scotland’s voice cracks when she describes a particular visit to a woman who was left with only a fridge freezer and a bed after Maria took everything else that she possessed.

Patricia Scotland’s own family home lost its roof, as did the family home of CARICOM’s Secretary General down the road.

“No-one I know has not been affected,” she said in Bonn. “Thank God that more people didn’t die.”

For her, the hurricanes and her visit to what she calls “war-zone” Dominica has given a personal note to the Commonwealth’s long-standing push for small states’ needs to be taken into account by the countries causing the most pollution.

She points to recent weather changes in the North as climate change makes its mark. “It’s one of us today and another of us tomorrow,” she points out.

“[Climate change] is the most pressing issue of our generation, “Baroness Scotland said. “The existential threat is here.”

Build back better: The Caribbean winds of change