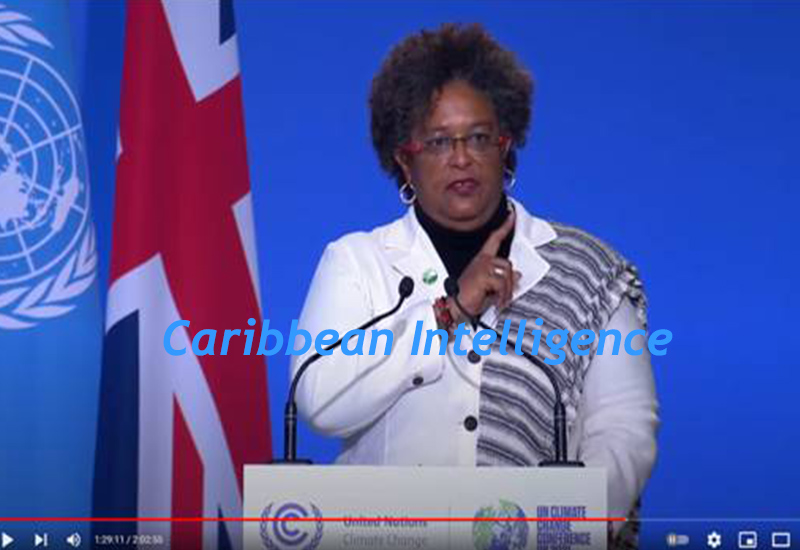 By David Jessop of the Caribbean Council

In just eight minutes she captured the attention of her fellow leaders, demonstrated all that was wrong with the world order, and proposed three practical ways in which wealthy nations might deliver the quantum of support needed by climate vulnerable states.

For the Caribbean and low-lying nations around the world, climate change is existential. Time is no longer on the Caribbean’s side. Without support for mitigation and adaptation, parts of the region could quite literally see much of their economic infrastructure destroyed, their populations displaced, and whole areas in low-lying nations disappear beneath the sea.

What is required is the rapid mobilisation of funding. In Glasgow, direct, to the point, and factual, Prime Minister Mottley in concert with other Caribbean leaders gave substance to ideas first articulated by Jamaica’s Prime Minister, Andrew Holness, in 2018. At COP26 she put forward concrete proposals that went far beyond the empty rhetoric that pervades so many wealthy nations approach to climate change.

Armed with a detailed understanding of what is required, she put forward three practical proposals that would in the medium term see the international financial system deliver, not just for the Caribbean but for the many at-risk nations in the Pacific, Africa, the Indian Ocean and elsewhere.

“Our world stands at a fork in the road; one no less significant than when the United Nations was formed in 1945. But then the majority of countries here did not exist; we exist now. The difference is we want to exist one hundred years from now,” Ms Mottley told world leaders present in the conference hall.

In remarks that built on the region’s previously expressed need for international financial institutions such as the IMF to create a new basis for support for indebted states graduated out of concessional financing, she called for “new flexible development finance instruments which will support responsible, resilient and inclusive growth.” If the Central Banks of the wealthiest countries could find US$25 trillion to rescue their economies through quantitative easing, she argued, a US$500bn increase annually for twenty years in IMF special drawing rights (SDRs) ought to be possible to help at risk states address climate change.

The idea is that in contrast to the IMF’s proposed US$50bn Resilience and Sustainability Trust, a fund established by the wealthiest nations of the magnitude Ms Mottley proposed might, if targeted on the most vulnerable and available to the private sector to bid for, attract through low borrowing rates counterpart private capital delivering carbon-cutting investments.

In Glasgow, Barbados’ Prime Minister also stressed the need for a loss and damage fund on the basis that the cost of extreme weather events of the kind the Caribbean is already experiencing cannot be met out of insurance premiums. Instead, she proposed a US$70bn fund available only to countries that had incurred a loss of more than five per cent of their economy through a climate-related disaster.

Ms Mottley also argued that because commitments made on mitigation by large carbon emitting nations were based on technologies yet to be developed, such rhetoric was at best reckless and at worst dangerous. Since this pointed to the likelihood of a 2.7°C rise in temperature by 2023 rather than the 1.5°C governments had committed to, the Caribbean and other most at-risk nations would in the real world have to adapt rapidly. This meant that fifty per cent rather than 25 % of agreed financing should be spent on adaptation.

In the end it was only the proposal relating to the IMF’s SDRs that made it to the final COP26 pact in the form of ‘encouraging’ multilateral institutions to consider ‘how climate vulnerabilities should be reflected in the provision and mobilisation of concessional financial resources and other forms of support, including special drawing rights.’

Despite the positive political engagement of  the US, the EU, the UK, and others with the Caribbean’s cause, it is hard to avoid the conclusion reached by Antigua’s Prime Minister, Gaston Browne, that “beyond the incremental gains, COP26 was merely a PR exercise, a great PR platform”. Worse, the absence of leaders from Russia and China and the desire of major carbon emitters including Saudi Arabia, Japan, Australia, and India, to slow the pace of change made clear that small vulnerable states around the world face a challenging future.

While the progress made may have been incremental - some might say attritional - time is running out for the Caribbean. If as seems likely, instead of the world moving to limit warming to 1.5°C above pre-industrial levels by 2023 and warming moves above 2°C, the region will need to move rapidly to harden its infrastructure to avoid the additional post pandemic economic burden of unpredictable catastrophic losses.

Beyond the multilateral financing initiatives being proposed by the Caribbean this would appear to require the rapid exploration of recently outlined programmes for infrastructure support that the US, EU, UK, and others in the G7 intend rolling out in implied competition with China, if that is they are prepared to find a way to address the inequity of having graduated the region out of concessional funding.

If they do not, the answer may lie elsewhere: in exploration of whether China’s commitment to Africa to invest in wind power, solar and renewables made at the just ended Forum on China–Africa Cooperation in Senegal, will be extended to the Caribbean.

Other pressing environmental issues also suggest the need for a new narrative.

In the longer term, strategic consideration needs to be given to how an uneven global energy transition and success or failure in addressing global warming might alter international relations, and the location of wealth and influence, including in the Caribbean. While closer to home, major hydrocarbon finds, growing environmental activism, the need to establish a new sustainable balance between tourism, agriculture, and extractive industries in the region’s land and sea spaces, and the protection of the region’s biodiversity, all require a better and more joined-up approach.

The Caribbean will of course not give up fighting for what is right. As a no or low carbon emitter it occupies the moral high ground, enabling unanimity between leaders.

Unfortunately, the region has no power to enforce outcomes. If the international rhetoric of the last 26 years is not translated into action, the Caribbean remains in danger of drowning in others unfulfilled promises.

David Jessop is a consultant to the Caribbean Council. This article is part of the Long View series.