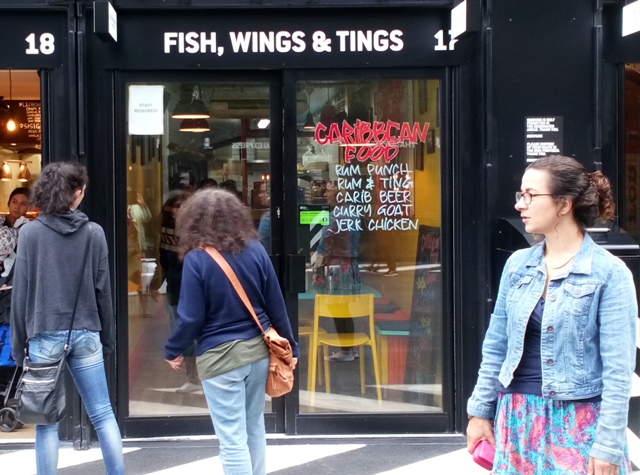 The brightly painted walls, the mix of soca and reggae and the Carib beers on display could make you feel that you’ve strayed off the streets of London into a Caribbean beach bar with sun, sand and sea just around the corner.

But you’re actually in south London -- and the people enjoying the Caribbean ambience of Fish, Wings & Tings are Londoners getting a flavour of Caribbean hospitality.

“The UK is a food capital. People have travelled and they know what they’re looking for,” Brian Danclair, the owner and manager of Fish, Wings & Tings, told Caribbean Intelligence©.

Brian was born in Trinidad and worked in Washington before moving to London. In the UK, he worked for Caribbean high commissions, providing them with authentic Caribbean food for their receptions and special events.

It was then that he noticed how Caribbean food was always offered by nationals for one another and on a mom-and-pop basis for other Caribbean people.

Anybody in the Caribbean Diaspora in the UK will be familiar with the family eatery, a reliable liming spot for people of Caribbean origin, their friends and a few adventurous local people.

Brian said his inner entrepreneur wanted to bring that island vibe into the mainstream.

Fish, Wings & Tings is part of a growing trend of Caribbean restaurants opening up across the UK, taking the food beyond the areas where the local Caribbean community lives, breaking out from the streets of the annual August Notting Hill Carnival.

Reading in Berkshire has this year become the venue for two similar ventures, showing how Caribbean people have moved out of the capital over the years.

Vibes Caribbean opened in June, calling itself a “family affair”. The family matriarch, Sharon Seville, is of Jamaican descent and grew up in Reading. Her family-run business is both restaurant and cocktail bar, offering a range of traditional dishes such as brown stew, as well as vegan-friendly dishes.

They told their local paper that they wanted to create quick and healthy meals with no additives or preservatives in “on-the-go” pots, to “prove there is more to Caribbean food than just curried goat and jerk chicken”.

Like many food start-ups in the UK these days, Earthpot started at a monthly vegan market and moved on to the festival circuit before becoming a year-round business – this one as food delivery service for busy working millennials.

The image of Caribbean food as being naturally healthy has served it well as it goes mainstream on the UK’s food stage.

In a 2018 article entitled Where to find the best vegan food in London, the London Evening Standard showcased Rainforest Creations, offering upmarket vegan fare with a Caribbean and South American twist. It singled out the “Caribbean roti and lentil burger” as showing Caribbean ingredients moving beyond their usual image of Carnival street food.

And before you assume the trend is confined to London and its environs, there’s also the Caribbean food outlet Big Belly in Derby. One of the owners, who is of partly Jamaican heritage and partly Seychelles descent, said they started the business with “a home fryer, an oven and an old Jamaican Dutch Pot [and] a following on social media”.

Even the quiet town of Petworth in west Sussex, home to archetypal English fields and country houses, saw a Cuban restaurant open in August 2018.

The word “authentic” pops up in most of these new 2018 ventures.

He says the trend is based on a mix of people trying the real thing while on holiday, friendly service which the British associate with Caribbean hospitality and dishes to reflect the growing popularity of vegan food in the UK.

He also credits people such as Jamaican-born chef/singer Levi Roots, whose TV appearances and special sauce franchise have awoken a new generation to real Caribbean food.

The use of fresh products by the new restaurants also provides a USP for Caribbean cuisine, as people begin to ask more questions about the ingredients in their food. His outlet uses fresh rather than canned foods and sources fresh vegetables and fruit, including mangoes, breadfruit and cassava.

Brian Danclair summed it up for Caribbean Intelligence as “authentic friendliness and food” to create a loyal clientele.

“Don’t underestimate the UK palette. Some of them have travelled more than some of us, so they know what they’re looking for,” Brain explains.

“You don’t just cater to the black community, you cater to everybody.”