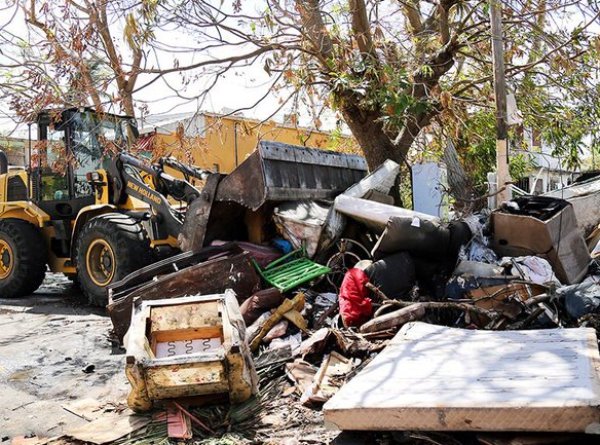 On October 2, two of the world’s leading humanitarian relief agencies, Oxfam and Save the Children, felt it necessary to speak out about the inadequate US federal response to the emerging disaster in Puerto Rico.

They observed that much more action was needed and that children’s lives were at stake. Carolyn Miles, the President and CEO of Save the Children, said: “Too many of Puerto Rico’s 3.4m people, which includes nearly 0.7m children, remain stranded without access to power, shelter, clean water, or fuel nearly two weeks after Hurricane Maria struck the island on 2 September.

Subsequently, both organisations have begun to work in partnership with local leaders to provide support and what they describe as an effective and sustainable response; something Oxfam said was rare for it to do in wealthy countries.

In a similar vein, in the thirty-five plus years in which this weekly commentary has been published, this is the first occasion when Puerto Rico has been its sole focus

This is because, although geographically a part of the region, Puerto Rico has largely remained an island apart, pursuing a separate approach to development within its status as a Commonwealth of the United States, rather than as a nation interested in sharing with its neighbours.

Only during the late 1980s and early 1990s under the Governorship of Rafael Hernández Colón, and his regionally well-liked Secretary of State, Tito Colorado, did the island truly seek to engage.

Under an agreement with the US Treasury, it created a Caribbean Development Programme. This actively encouraged major companies invested in Puerto Rico through a tax break, to also manufacture in other Caribbean nations to take advantage of the Reagan Administration’s Caribbean Basin Initiative. The result was 185 Caribbean projects, about US$3bn in investment, and the creation of 37,000 jobs in the Dominican Republic and CARICOM mainly in pharmaceuticals, textiles, apparel and electronics.

More recently, economic relations between Puerto Rico and the Dominican Republic and other forms of co-operation have begun to advance, in part because of the complementary aspects of the two economies for production sharing and investment.

For the most part, however, Puerto Rico stands alone in the region in which it is located, and apart from the many overlapping Latin American and Caribbean institutions that now exist. Heavily indebted, it continues to actively seek statehood, having to rely in the meantime on a complex relationship with the federal authorities in Washington for example in the event of an economic crisis of the kind it is currently undergoing, or the humanitarian disaster wrought by Hurricane Maria.

Despite this, and the US’s superior military and emergency relief capabilities, until a few days ago, the US administration seemed incapable of mobilising a relief effort at least equivalent to that seen elsewhere in the US.

Even then, when President Trump visited San Juan on 3 October, his support was begrudging. He told Fox News ungraciously that the hurricane meant that Puerto Rico's US$70bn debt would have to be wiped out and that it had thrown the federal budget "out of whack”. It was a response that contrasted unfavourably with the generosity of the French, Dutch and British in their neighbouring territories.

Rightly or wrongly this has given rise to sentiment that the administration’s inaction in Puerto Rico contains an anti-Hispanic bias and a sense that ordinary Puerto Ricans are somehow not Americans.

Irrespective, it is apparent that Miami, New York and other locations where Puerto Rico’s mainland Diaspora have over decades chosen to live, are now set to see many more island residents escaping from present hardships.

For the rest of the region Puerto Rico poses a conundrum. If the US is indifferent, it begs the question as to whether, as it rebuilds, more might be done by neighbours to identify whether a closer relationship is possible.

Unfortunately, some of the more obvious options to do so are limited. Its status means that it

does not possess tariff autonomy or the ability to determine an independent trade policy. For almost every external initiative, it requires Washington’s agreement, and unlike the US Virgin Islands there are few of the strong personal relationships that senior political and business figures have with their counterparts in the Anglophone Caribbean.

Despite this, it will be interesting to see whether the focus might change given some of the ideas that the Mayor of San Juan, Yarimar Bonilla – a free thinking, socially aware, Caribbean politician to look out for - described in a passionate, thoughtful and frank interview with the veteran journalist, Bill Moyers, for PBS, the US Public Broadcasting service.

In her remarks, which deserve to be seen, heard or read in full at http://billmoyers.com/story/vulture-capitalists-circle-puerto-rico-prey/ Ms Bonilla makes clear that the island has the same vulnerabilities as the rest of the region.

“There’s a lot of talk about the island’s environmental precarity and vulnerability. It’s true that the Caribbean is on the front lines of effects from climate change. But there are other forms of vulnerability, like socioeconomic vulnerability. And also, a political vulnerability because Puerto Ricans don’t really have anyone in Congress advocating for them. They’re nobody’s constituents. They have no representation and no one who can leverage votes and trade deals with other states in order to get things expedited on the ground there”, she said.

Continuing, she told PBS: “My hope is that because this is such a deep political crisis, it will generate more than a banal optimism that simply says “Oh, let’s build better,” and stops there. I hope that it will lead to a profound grass-roots social movement — a movement of people sick of the government and sick of the limits of the political relationship that Puerto Rico has with the United States, which produced a delayed response by Washington to the devastation after the last hurricane”.

While not in any way wishing to diminish the devastation caused in Dominica, or the valiant recovery efforts underway in the USVI, BVI, and on both sides of St Martin, Ms Bonilla’s words demand regional attention.

They offer an opening for a dialogue once the immediate crisis is over.