CI Shorts: From Windrush to Chelsea - The Caribbean says it with flowers 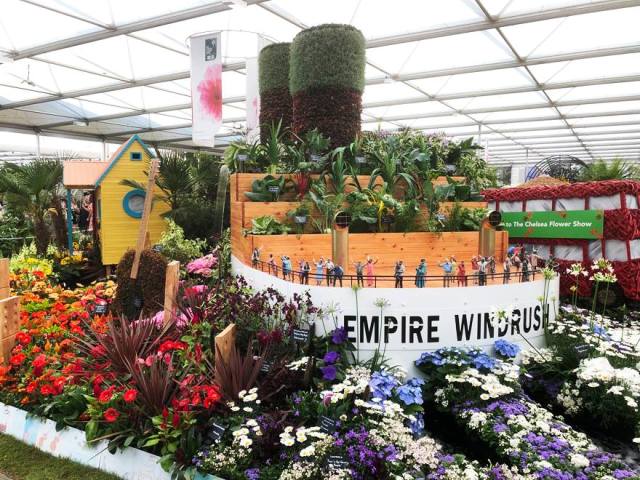 An exhibition showcasing plants from the Caribbean and the UK and marking the 70th anniversary in June of the arrival of the Empire Windrush won a gold medal in Chelsea’s Great Pavilion.

The design was exhibited by Birmingham City Council which worked with Trinidad-born Baroness Floella Benjamin, a former UK television presenter, to portray the personal experiences of people moving from the Caribbean to start a new life in 1950s and 60s Britain. The plants showcased both regions and the all-important allotments that have helped different communities to integrate in the UK over the decades.

Pure Grenada copped another Chelsea gold medal with its Road to Success display.

This is Grenada’s 14th gold at the show. The arrangement of Caribbean flowers included a traditional board bus in the display.

Barbados also continued its winning streak with a gold medal for its display entitled Where Rum Comes From. The 2018 theme pays tribute to Barbados's sugar and rum heritage.

Over the years, Barbados has notched up 19 gold medals, 11 silver-gilt and one silver medal. The team from the Barbados Horticultural Society this year included rum barrels, sacks of raw Bajan sugar and cane baskets as well as huge cocktail glasses with contents.....Cheers!

According to Caribbean Beat magazine, previous Caribbean winners at the Royal Chelsea Flower Show have included Grenada, Jamaica and Trinidad and Tobago. Trinidad was the first to exhibit in 1974, followed by Barbados in 1984. Grenada first came to Chelsea as part of a Windward Islands team in 1989 before going solo. Jamaica has been taking part since 1996. Caribbean Beat provides an excellent trip down this floral memory lane.

Also available - the Caribbean at Chelsea 2017.

Caribbean News and analysis from home and abroad by Caribbean Intelligence.

What's the Buzz - Caribbean Intelligence's fun and cultural side.

Caribbean Intelligence on Facebook for features about Caribbean people and issues.