The danger in what others wish for in Venezuela 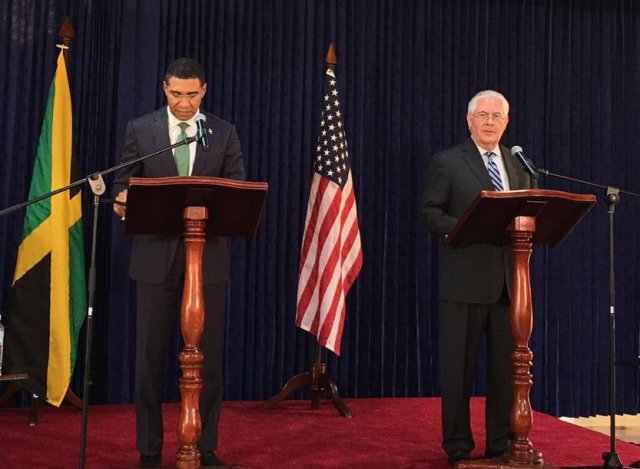 A few days ago, the International Energy Agency reported that oil production in the US was undergoing extraordinary’ growth. The OECD-related body for net importers of oil said that the increase meant that US ‘production could equal global demand growth’ largely because of its rapidly expanding shale output. This meant that US production would probably reach 11m bpd by late 2018, outstripping Saudi Arabia and offsetting OPEC-led supply cuts aimed at increasing energy prices.

It is the background against which a potentially seismic shift in US policy towards the western hemisphere is being considered. Although it will require the agreement of President Trump, it will likely involve Washington imposing sanctions on the export of Venezuelan oil, Mexico considering with others a PetroCaribe type regional oil programme, and the US seeking to export oil and gas to Latin America and the Caribbean while promoting support for new forms of partnership.

It is the context in which the US Secretary of State, Rex Tillerson, the former Chairman and Chief Executive Officer of ExxonMobil, recently visited Mexico, Argentina. Peru, Colombia, and Jamaica.

In each location the US Secretary of State said that the US was considering restricting imports of Venezuelan crude oil and the export of refined US products in order to place political pressure on the Maduro government.

In Kingston, during a three-hour stop over, Mr Tillerson was explicit about the possible impact on the Caribbean, observing that any such action would affect negatively those nations that continue to benefit from Venezuela’s PetroCaribe programme. However, Canada, Mexico and the US, he said, had agreed at a recent trilateral meeting they would put together a very small, focused working group to study what could be done to mitigate the impact on the Caribbean. He also said that Jamaica and others might benefit from the US having become a net exporter of energy.

Before he set off on his five-nation tour, Mr Tillerson sought to put all of this in context. At the University of Texas, he spoke at length about US policy towards the Americas.  He suggested that in future, economic growth, security and democratic governance will be the principal pillars of US engagement, and that energy security and energy connectivity will become central components in Washington’s approach to western hemisphere development and security.

More surprisingly, given hemispheric sensibilities, he suggested that the Monroe Doctrine - the 1823 and 1904 policy that asserted US authority in the Americas - was still of relevance. Praising it as “clearly…a success”, and in an apparent repudiation of the thinking of his predecessor, John Kerry, who in 2013 announced that the era of the Monroe Doctrine was over, Mr Tillerson said, “I think it’s as relevant today as it was the day it was written.”

His visit and remarks come at time when many in the region and elsewhere, who had been sympathetic to the social change that the late Hugo Chavez had been trying to achieve in Venezuela, have ceased to defend the chaos subsequently wrought. Despite the country sitting on the largest proven oil reserves in the world and its stated socialist intent, government mismanagement has meant that huge numbers of its people are now suffering from severe food and medicine shortages, hyperinflation, criminality and violence, and are choosing to become refugees in neighbouring countries.

It was in this light that Mr Tillerson hoped to obtain the support of the countries he visited for tighter US sanctions on Venezuela.

In Kingston, although describing Jamaica as “our closest partner in the region”, and saying that the US was excited about the possibilities that might emerge because of Jamaica’s assumption in July of the rotating chairmanship of CARICOM, Prime Minister Holness’ response was understandably guarded.

Stressing the wide range of bilateral issues discussed with Mr Tillerson and the need for positive engagement in Venezuela between government and opposition, Mr Holness reaffirmed to the press that Jamaica conducted its foreign policy on principle and did not do so for aid.

Notwithstanding, the lasting impression was that the US is expecting more than bilateral support from Jamaica.

Effects for the Caribbean

Despite this, trying to change the policy of the Maduro government through new sanctions, let alone encouraging regime change will not just have consequences for Venezuela’s long-suffering citizens, but will also have political, economic and security consequences for the Caribbean and all of Venezuela’s mainland neighbours.

While there may be support within CARICOM for some aspects of US hemispheric policy, any attempt at achieving a common position on Venezuela beyond expressions of concern, is likely to divide the region at a time when other difficult pan-Caribbean issues are on the table.

It is also likely to make more complex achieving the unalloyed regional support that Guyana needs for the UN’s decision to refer its boundary dispute with Venezuela to the International Court of Justice; bring into question why Venezuela recently decided to forgive both Dominica and St Vincent’s PetroCaribe debt; raise concerns about Guyana’s decision to initiate security related discussions with the Brazilian government on a new military cooperation agreement; and divide the region ideologically.

Worse, if new US economic sanctions on oil mean that the internal situation in Venezuela were to deteriorate further, the already uncontrollable illegal cross-border activity involving smuggling, people trafficking and related concerns that are already affecting Trinidad and the Netherlands Antilles, will accelerate.

There are also wider implications: Cuban government statements make clear that Havana is irrevocably committed to the survival of a socialist government in Venezuela; Russia continues to explore how it might play a larger role in Venezuela; and China to a lesser extent may also seek to retain a close relationship.

Mr Tillerson’s proposals come at a time when regional concerns continue about the US President’s recent insults to regional partners, the US refuses to recognise the existential nature of climate change, and seemingly now supports a return to hemispheric suzerainty.

In short, the Caribbean will need to think very hard about where it stands as a region before supporting what others wish for in Venezuela.