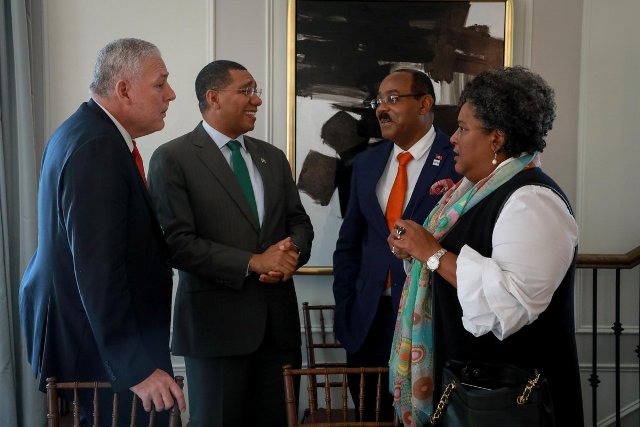 For most citizens, international organisations such as the World Trade Organisation (WTO, the G20 and even the International Monetary Fund (IMF) have little immediate significance. Like all remote international institutions and groupings, they resonate with the everyday only when their proposed solutions or rulings affect employment, the future of an industry, levels of taxation, or government’s ability to fund social services.

They have an image not helped by the high style in which their staff live and their intellectual remoteness from the lives of those whose fortunes their thinking and remedies touch.

Despite this, at this year’s United Nation’s General Assembly almost every Caribbean Head and Foreign Ministers spoke specifically about the importance of multilateralism -  alliances of multiple countries pursuing a common goal usually through international groupings – and the threat the approach of the Trump Administration now poses to global institutions.

To take just one example, in New York Guyana’s Foreign Minister, Carl Greenidge, made clear that Guyana believed in the value of multilateralism, describing it as a “rules-based system with a pivotal role for nation states alongside key international and multilateral institutions”. What it provided, he said,  was largely predictable, based on the rule of law and had enabled extensive economic development and improvements in human welfare.

He warned however, as did many other speakers from around the world, that multilateralism and the consensus previously achieved was now under attack in relation to trade, economic growth and the peaceful resolution of conflict.

What Mr Greenidge and others from the Caribbean were expressing was their concern that the US now threatens to cast aside the mutually agreed interdependent approach that it helped create, making uncertain the outlook for successful global problem solving.

In a brutal affirmation of this and the way in which  US policy has changed, the US President, Donald Trump, had earlier told the UN General Assembly: "America is governed by Americans. We reject the ideology of globalism, and we embrace the doctrine of patriotism. Around the world, responsible nations must defend against threats to sovereignty, not just from global governance, but also from other, new forms of coercion and domination."

His overall remarks  appeared to suggest that all nations should permanently acquiesce to the requirements of one super power, the US, setting aside their own interests and values.

Speaking informally a few days later the German Chancellor, Angela Merkel’s response was succinct and direct. "I believe that destroying something without having developed something new is extremely dangerous”, she said, before going on to add that she believed multilateralism remained the solution to many of the world's problems.

The new US exceptionalism poses particular dangers for the Caribbean.

In 2015 the world including the US agreed that there was overwhelming scientific evidence to show that if the global temperature rise is not halted at plus 1.5°C (2.7°F) above pre-industrial levels there will be rapid unprecedented changes in the world’s climate. This will involve significant changes in sea level, an increase in extreme weather events, and severe environmental damage. Despite this, a just published UN Intergovernmental Panel on Climate Change report makes clear that the world is not on course to reach even a plus 2°C (3.6°F) target by 2040 and is, according to Petteri Taalas, the Secretary-General of the UN World Meteorological Organization, “moving more toward 3°C to 5°C at the moment”.

Such an outcome would be catastrophic for the Caribbean and other low-lying nations and regions.

Irrespective of the potential global impact or the increasing severity of weather events the US itself is experiencing, the Trump Administration will in 2020 withdraw from the UN agreement on climate change and is already lifting domestic environmental controls and returning to fossil fuels.

The effect is to undercut the task that the UN has asked Jamaica’s Prime Minister, Andrew Holness and France’s President, Emanuel Macron to undertake: to lead a political initiative that ensures governments globally fulfill their commitment to mobilise US$100bn a year by 2020 to support those states which to survive, must mitigate and adapt.

Just as significant is the uncertainty surrounding future funding for the IMF, a body on which almost every CARICOM nation has had to rely for economic recovery.  The institution is seeking an increase in its permanent reserves for lending, knowing that more than half of its present US$1 trillion in such funds requires renewal by 2022. The US Treasury, however, remains uncommitted causing the IMF to become  concerned that if the escalating US trade war with China impacts on emerging and developing economies the demand for its support will increase beyond its capacity to help.

At the WTO the picture is also bleak. US policy has all but removed the global trade organisation’s ability to function in the longer term by the simple process of failing to agree to the appointment of new judges to its appellate body which plays a central role in the resolution of trade disputes. This has according to Caribbean diplomats left the consensus-based body’s ability to  settle disputes or enforce rulings close to collapse. In addition, they say, by utilising WTO rules meant to relate to national security, to impose tariffs on steel, vehicles and other products from its allies, the US has undercut the trust and mutuality the organisation needs to function effectively

At the heart of what is fast becoming an international debate about the future of multilateralism is whether President Trump’s unilateral approach and desire for global control is the new normal, an aberration to be waited out, or something more fundamental that others, especially China, will begin to react to covertly and overtly .

Put another way, what is happening begs the question, should nations now see as lasting Washington’s belief that it has the right to act unilaterally and that its sovereignty and supremacy are not to be challenged, and seek new alliances?

EU27 diplomats in Washington suggest that the US’ unwillingness to cooperate is already encouraging Europe and many other nations to begin to develop relationships that will ultimately weaken US influence, damage Atlanticism and cause alternative poles to emerge across the Pacific and in Eurasia.

Fragmented, small and vulnerable to external shocks of every kind, the Caribbean’s has increasingly come to depend on multilateralism to survive and develop.  Although the region’s geographic location argues for a close relationship with the US, Washington’s intentional weakening of global institutions may have the paradoxical effect of encouraging it into new antithetic global and hemispheric alliances.