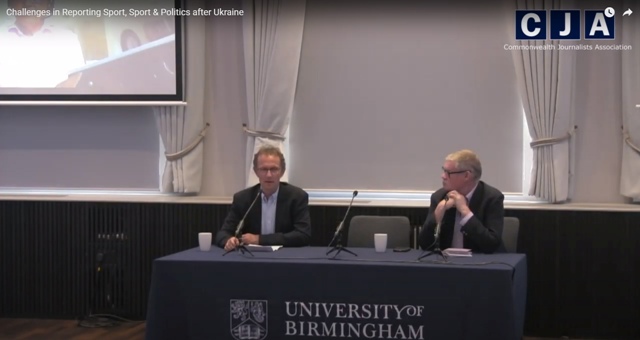 In the run-up to the opening of the Commonwealth Games in Birmingham on 28 July, the Bhangra capital of the world and home of pop-reggae band UB40 has been promoting its diversity.

The most seen video ahead of the Games showcases “Brum” (as the people of Birmingham refer to their city) with the reggae vibe soundtrack “It’s a Brum ting”.

So it was hardly surprising that a 30 June pre-Games conference organised by the University of Birmingham, the Institute of Commonwealth Studies (ICwS) and the Commonwealth Journalists’ Association (CJA) put aside time for a session to discuss Challenges in Reporting Sport, Sport & Politics after Ukraine, with a strong focus on race and sport.

The panellists explored how sports reporting had changed over the years to include non-sporting issues and how the Commonwealth Games had raised its profile over the years.

Mihir Bose said that broadcasters were braver today about reporting on politics in sports.

“You can’t lose sight of the reality of life,” Jeff Foulser said about the increase in reporting on political issues in sports.

Mihir Bose asked whether issues such as decolonisation and reparations would have an impact on the games. In response, Jeff Foulser said that the games had always been politically charged. He pointed out that in 1934, apartheid South Africa had not wanted to invite athletes from “non-white” countries, so the games had been moved to the UK. The event had also been threatened in 1986 by an anti-apartheid boycott: as he said, the politics of the time “damn nearly broke the Commonwealth Games”.

2018: A good Commonwealth Games for the Caribbean

Shilarze Saha Roy said that politics in sport had affected Pakistani players, shut out of lucrative events such as the Indian Players League (IPL). “We should harness the spirit of sports in unifying,” he said.

Jeff Foulser said that new Commonwealth member countries were enjoying the games as a chance to take part in elite athletic events. He said that the future problem would be finding a host city because of the cost.

Towards the end of the discussion, panellists tackled the issue of race in sports reporting.  Jeff Foulser explained how sports writers had, in the past, avoided such issues such as politics and race on the basis that “I’m a sportswriter, I don’t report on that”.

Philip Barker described scenes in the past when England’s early black football stars, known as the Three Degrees (Cyrille Regis, Laurie Cunningham and Brendon Batson) had faced boos when they touched the ball. He said that reporters had started to report on the crowd behaviour at that time. He charted how this had developed into today’s sports reporting, where the taking of the knee had become a part of the story.

Jeff Foulser described it as a “sea-change in the way that these issues are now reported”. He added that sports reporting in the UK had changed, adding that “we like sporting greatness, whatever the colour of the skin”.

Mihir Bose pointed to the growth in reporting on race in sports in the light of the increased prominence of the Black Lives Matter movement following the killing of George Floyd in the US. “We are now seeing this effort to create a non-racial sports world... In 50 years as a journalist, I have never seen so much reporting on race in the sports pages,” he added.

Shilarze Saha Roy described the growth of reporting race in sports, to the point where the Indian press had reported on how West Indies cricket star Darren Sammy had been racially abused in the SunRisers Hyderabad dressing room during his time with the IPL in 2012-13.

‘Stepping stone’ to the Olympics

So why do the Commonwealth Games still appeal today?

Mihir Bose said that the Games had become a success story.

Jeff Foulser said that the timing of the Games, with fewer global sporting events to compete with and free-to-air BBC coverage on all platforms, would showcase athletes from across the Commonwealth. He said that a host broadcaster training initiative also offered paid jobs and training for students.

Philip Barker said that full stadia and young people getting into sports after the games would be the mark of a successful Birmingham Games.

Shilarze Saha Roy described the upcoming Commonwealth Games as a “stepping stone” to the summer 2024 Paris Olympic Games. He said that the Birmingham Games would help athletes “feel where their place will be” ahead of Paris and get “that energy going before the Olympics”.

The Commonwealth Games will run from 28 July to 8 August.

2018: A good Commonwealth Games for the Caribbean