CI Gallery: A good Commonwealth Games for the Caribbean 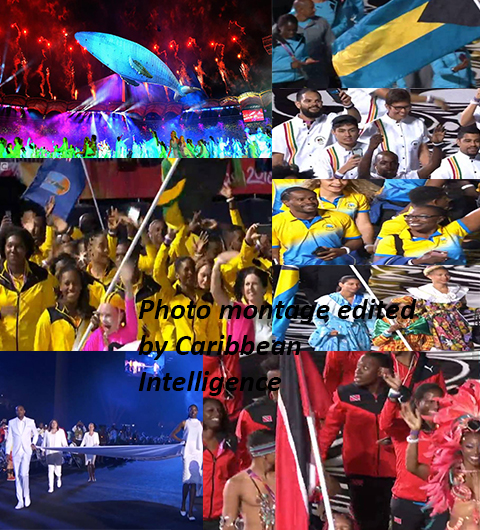 From the opening ceremony to the closing medal tally, this has been a good Commonwealth Games for the Caribbean, giving the region a number of firsts, some old favourite appearances and a general good time on Australia's Gold Coast.

While pre-games coverage spoke of the "post-Bolt era", the next generation of Caribbean sporting stars made it clear at the Commonwealth Games that they can still notch up a medals tally and put on a brilliant show from start to finish.

Caribbean Intelligence shares some of the best moments for us during the Commonwealth Games, starting with the spectacular national outfits and costumes.

There's a first for everything

A number of first-time medals were won as Caribbean athletes tested themselves beyond the events they've previously dominated in.

An IAAF report said of Aisha Praught's 3000m steeplechase win that "it’s one thing for Kenya to lose a Commonwealth distance title to Uganda, but a Jamaican winning the steeplechase – it is indeed a changing world".

Praught, of Jamaican-American heritage, used a mix of her US coaching and sprint skills from the Jamaican team to take the nation's first-ever steeplechase gold.

In other #GamesOfFirsts, Jamaica made its debut in the lawn bowls event (we’ve been following them from the start). The British Virgin Islands’ Kyron McMaster won his territory’s first Commonwealth medal with a 400m Hurdles Gold.

And, while we're talking firsts, Michelle-Lee Ahye took Trinidad and Tobago's first 100m women's gold medal with a time of 11.14.

Michelle's mother told local TV6 that "Michie" comes from a family of runners. Her granny used to break records and her mother also took to the track. She says she hopes that her daughter's triumph will lead to more people turning out for sports in Trinidad & Tobago.

Making a splash: Alia and Dylan

In the pool, Trinidad’s only aquatic athlete, Dylan Carter, took a silver medal in the 50m butterfly event.

The president of the Amateur Swimming Association of Trinidad and Tobago, Wendell Lai Hing, said in an open letter: “At times in the realm of sport, sometimes athletes are not treated as they should and you must have endured more than your fair share of challenges. Sometimes, as an Association and a country, there is so much more we could do support our athletes. In spite of all of this, you have remained focused and dedicated and continued to valiantly represent the red, white and black.”

Jamaica’s Alia Atkinson had kicked off the nation’s victory tally with the first Jamaican medal at the Games in the women's 50m breaststroke. Her silver in the Gold Coast takes her Commonwealth Games medal haul to three since she first made a splash in 2006 in pool events at a global level.

Alia, who had been the first black woman to win a swimming world title in 2014, was the flag bearer for Jamaica at the opening ceremony.

Even at the friendly games, there had to be some controversy. Trinidad & Tobago’s Jereem Richards didn’t know he had taken the gold medal in the men’s 200m final until officials stripped England’s Zharnel Hughes for impeding the Trinidadian’s finish. Hughes had done a lap of honour wrapped in the English flag after both men clocked 20.12 only to then be told in front of the world’s cameras that he’d been disqualified.

England appealed, but the disqualification was upheld and the medal ceremony delayed.

Jereem, known as “The Dream” back home, told the Trinidad Guardian: ”Coming down the home straight, he was ahead and when I started to catch him, he started to break down a little bit, and I felt his hand came across into my lane and hit me as we head to the line.”

The Australian media reported that, in the confusion after the race, Richards had to ask the press pack: “Did I win?”

What is not in dispute is that it was an excellent showing by all the Caribbean athletes at the Commonwealth Games. We at Caribbean Intelligence apologise to those we have not been able to mention.