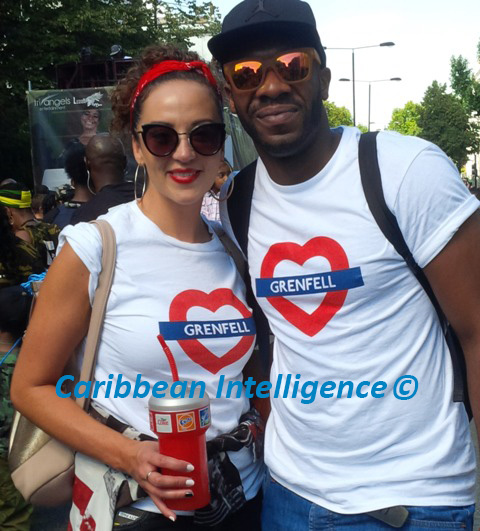 Doves released, fire officers hugged - nearby Grenfell and its disaster was mentioned in street art, truck posters, clothes and in special ceremonies during the two days of Notting Hill Carnival. [Photo by Debbie Ransome]

And the crowds came out in full for two of London's sunniest August days ever.......clearly somebody brought the Caribbean sunshine with them for the party. [photo: Caribbean Intelligence]

A Caribbean feel was never far away...even if it's the biggest street party in Europe, attracting thousands from around the world. Doesn't the Grenada flag look great in the London sun! [photo by Debbie Ransome]

Every Caribbean flag (other parts of the world were available) could be spotted on the streets of West London during the festival. [photo: Caribbean Intelligence contributor]

The message was clear even on the side of Carnival band trucks during the two-day party. [photo: Debbie Ransome]