Thomas Cook and the Caribbean 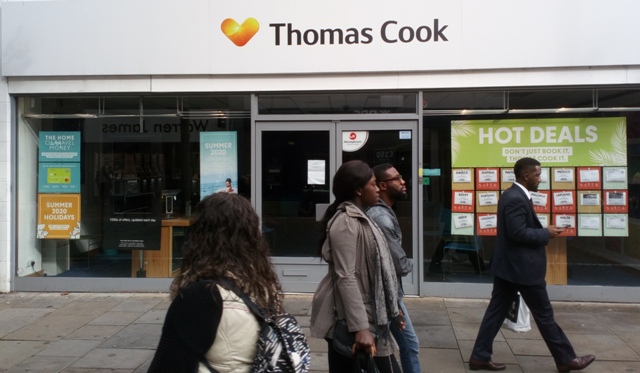 On 7 October, the last of the holidaymakers left stranded abroad after the collapse of Thomas Cook arrived back home in the UK at the end of a massive two-week government-backed operation. Operation Matterhorn, as it was known, shifted 100,000 passengers in 150 planes.

As the business analysts pick through the demise of one of the world’s largest travel companies, this snapshot of its Caribbean presence indicates a part of its problem. It had a role in everything – flights, resorts, hotels, entertainment.

The world’s oldest tour operator had been big in the Caribbean, as in many other parts of the world. In a 2016 article called “How to choose the best Caribbean island for you”, Thomas Cook described the Caribbean in the following ways: Best for history – Cuba, Best for culture – Jamaica, Best for scenery – St. Lucia and Best for traditions – Tobago. On the Dominican Republic, Thomas Cook said its 5-star resort package “covers everything – from flights, taxes and accommodation, to food, drink, entertainment and activities. You literally don’t have to do a thing… Other than relax, that is”.

The numbers stranded indicated just how much of the travel pie Thomas Cook had its fingers in. Following the company’s 23 September liquidation, Operation Matterhorn used 50 airline partners to get people home. After that, work began on refunds for more than 360,000 Thomas Cook bookings under the UK’s ATOL (Air Travel Organiser's Licence) protected holiday scheme.

Headlines focused on the individual stories that lay behind those figures: Gloucestershire couple stranded in Caribbean after collapse of Thomas Cook 'have no more cash left'; A wedding party of 45 people were left stranded at Manchester Airport after their Thomas Cook flight to Jamaica was cancelled. At least 1,600 people had been flown out of Cuba alone.

Even the cruise industry had Thomas Cook involvement. Royal Caribbean’s UK managing director, Ben Bouldin, said that Thomas Cook had “always been very good at attracting new customers to try cruise”. He added that the collapse of the company had left Royal working hard “to mitigate the hole”.

“There were so many aspects to Cook’s business that we can’t just offer a one-size-fits-all approach, so we need to be able to help agents in the right ways,” Mr Bouldin told TTG Media, adding that every travel business would be affected.

In another measure of Thomas Cook’s clout, many in the industry credit the company with building back Tunisia’s hotel sector after the 2015 terror attacks. By the time of its collapse, it was flying in about 4,000 people a week from the UK to Tunisia.

According to the Caribbean Media Corporation, Thomas Cook had been responsible for taking up to 14,000 passengers to Jamaica a year and providing about 24,000 seats from the UK to Barbados in the winter season.

Jamaica seemed to make a rapid recovery. Its Tourism Minister, Edmund Bartlett, had initially said that the demise of Thomas Cook could leave the island with a loss of 5,000 visitors between September 2019 and January 2020. He put his faith in aggressive marketing as he prepared to head to the annual World Travel Market in London.

However, a few days later, Jamaica had clearly made a rapid comeback, as Mr Bartlett announced that talks with Virgin, British Airways and TUI had completely restored all the seats that would have been lost for the period. He added at the start of October that “we are expecting additional arrivals for the winter... Today Jamaica became the first country to conclude fully all the arrangements to recover the loss airlift occasioned by the collapse of Thomas Cook.”

One of the travel companies filling the Thomas Cook vacuum, TUI, is itself an example of the power of resurrection in the travel industry. Its UK operation had risen out of the ashes of Thomson, which went into administration in 2000 before being subsumed into German-owned TUI.

The Thomas Cook collapse has served to remind the Caribbean of something it re-learns every hurricane season about the ups and downs of fortune in the travel industry.

“While never losing sight of the fundamentals of hospitality, the dynamics of our industry demand our adaptability and responsiveness to change if we are not to face a similar fate,” she said.

Another long-standing British brand, the Co-operative, said after the Thomas Cook liquidation that there were lessons to be learnt.

The Midlands Co-op merged its High Street operations in the Midlands with Thomas Cook in 2011 to form Thomas Cook Co-operative Travel. Co-op News reported that the idea had been to generate economies of scale, but that many Midland towns continued to have more than one branch of the enlarged business operating, with “excessive” overheads. With debts mounting up, the Co-op group extracted itself from the travel business in 2011, leaving Thomas Cook with an unworkable High Street shop-based model which continued to rack up debts.

Co-op News reported: “The acquisition of the Group and Midlands’ Co-operative Travel businesses is now regarded as one of the factors in the failure of Thomas Cook.”

According to the Co-op, Brexit was the last nail in the Thomas Cook coffin, with many Brits staying home during a prolonged period of uncertainty.

In Britain’s toxic Brexit environment, many were keen to point out the potential danger for other British companies in a no-deal Brexit scenario.

The New European wrote on 28 September: “The firm's demise also serves as a reminder that few companies will collapse 'because of Brexit'. There is rarely one reason for a business to fail, and Thomas Cook failed for many reasons - it was saddled with too much debt, the weather didn't work in its favour, and in an online era many travellers don't need package holidays any more.

“Lots of businesses have multiple problems already but, barring another shock, will be likely to survive them. The very possibility of Brexit was enough of a shock to Thomas Cook's business to help deliver the coup de grace.”

The Australian media put it down to what news.com au called the “fickle” airline industry, where aeroplanes are expensive assets to own and run, with few alternative uses aside from transporting cargo and passengers from A to B.

University of Technology Sydney tourism lecturer David Beirman said that while a company as iconic as Thomas Cook going under was a “really big shock”, their inexperience in aviation saw them flounder in a competitive market.

He told news.com.au. that “It’s a perishable industry. If you don’t have a full tour group or empty hotel room or not a full aircraft, that’s a licence to lose money.”