On the Caribbean grapevine 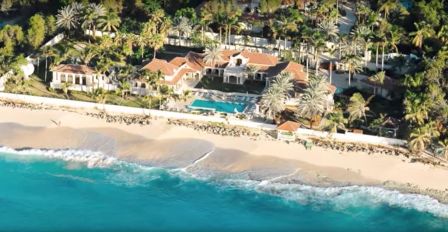 “Greetings from Donald J. Trump. Escape to a place [like] no other.”

Donald Trump’s invitation in a brochure for his French St Martin properties. The near five-acre walled estate has been put up for sale by a corporate trust at an asking price of US$28m.

“As the Commonwealth Caribbean Association, we must also ensure that our side of the story, the work, the efforts, the data that we have, must also be released to the public, we need to share it, so that the public can have an objective picture of what is happening, not only here in Grenada but what is happening across the region....If we don't, then a perception index will not tell the story for us and all the efforts that we are making, not only here in Grenada but across the region.”

Immediate past chairman of the Commonwealth Caribbean Association of Integrity Commission and Anti-Corruption, Lady Anande Trotman-Joseph, after a meeting of anti-corruption agencies. The conference called for a regional alternative to the Transparency International anti-corruption index.

“In the past, visitors came to the Caribbean for sand, sun and sea…and the food was just simmering on the back burner...As crazy as it sounds, it’s actually what’s driving business right now. Look at TripAdvisor, and see what visitors say in their reviews. More often than not, they’re talking about what they ate on their vacation. Food matters.”

“I do want to alert you...the secretary is going to be sending a request to us to be more responsive...I know some of it is not captured, but we’ll have to figure out a way to squeeze more data out of our systems.”

Internal U.S. Citizenship and Immigration Services emails obtained by Associated Press (AP). AP reported that the Trump administration is seeking evidence of crimes committed by Haitian immigrants as it decides whether to allow them to continue participating in a humanitarian program that has shielded tens of thousands from deportation since the 2010 earthquake. AP said that the emails did not make clear if Haitian misdeeds will be used to determine whether they can remain in the United States.

Updated news from the Caribbean and the Diaspora on Caribbean Intelligence's news analysis page.