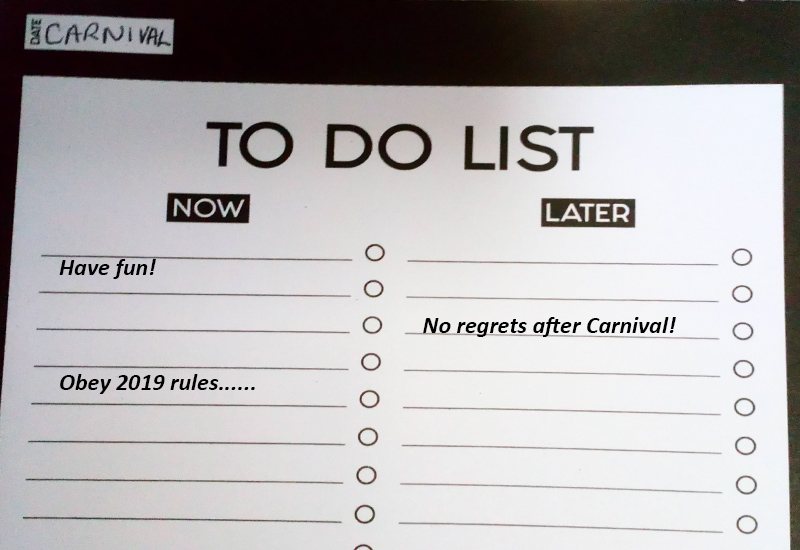 Many of the Caribbean-inspired carnivals take their cue from Trinidad & Tobago’s massive event held just before Lent each year. Soca tunes, new trends and costume reinvention have set the trend from Notting Hill to Labor Day to Caribana and even provided design inspiration for the opening of the 1992 Barcelona Olympics.

So will the 2019 modern rules for Trinidad’s Carnival find their way on to the books of other carnival events around the rest of the Caribbean and the Diaspora this year?

Here’s the advice so far on the eve of Trinidad’s 2019 Carnival, with its main event in the streets of the capital, Port of Spain and many, many other events and carnival parades held in other Trinidad & Tobago towns and cities. Some will make you smile a lot and some are obvious for our modern times.

Trinidad’s Education Ministry gave a stern warning to the public to “refrain” from “inappropriate activities with minors” during the Carnival season. The temptation to share the carnival joy of wining (twerking, if you’re American) and sharing alcohol is not for children, warned the ministry’s guidance officer, Darlene Smith. According to the Trinidad Express, Ms Smith warned: “Adults, do not use the umbrella of Carnival to dance on or gyrate on minor children. This can be construed as sexual grooming, which is an offence and will not be acceptable.” She also advised parents to keep an eye on what drinks their children have access to at home, in their neighbourhood and at friends’ places. Children were also advised to stay in groups and watch out for each other during the carnival period.

Only selfies are free:

Trinidad & Tobago has been at the forefront of the battle on band design, copyright and intellectual property, as Caribbean Intelligence has reported over the years. (ADD LINKS). Trinidad’s Newsday newspaper reported in 2019 that people will not be charged for taking a selfie with friends in a mas (masquerade) band. Photographers have also been asked to seek permission before taking casual pictures.  However, the chief executive of the Trinidad & Tobago Carnival Bands Association (TTCBA), Gerard Weekes, said that copyright fees will apply to pictures of works of a mas band captured, either directly or indirectly, for commercial intent. The vice-president and founder of the TT Copyright Collection Organisation (TTCO), Vijay Ramlal Rai, told Newsday that TTCO “hopes the protection of intellectual property of works of mas for designers, bandleaders and performers can generate income for them, both locally and internationally”. Dr Rai said that the protection of intellectual property rights for works of mas had been ignored for a long time, even though the law had been on the books for some time.

This rule is not just about drinking and driving. If you’ve ever seen a lonely car stuck near a passing mas band as merry masqueraders wine all over the bumper on Carnival Monday and Tuesday, you’ll know what we mean.  Drivers can be in danger from happy masqueraders, too. Ahead of this year’s festivities, TT Road Safety Council President, Stan Huggins, called for permission to set up road safety officers at street events and rest points for tired drivers.

“Pick up something” does not mean “help yourself to property or to people”!

One Trinidad &Tobago Assistant Superintendent of Police (ASP), Wayne Mystar, warned the public in the week before carnival 2019 to curb their enthusiasm when the currently popular Mr Killa tune “Run wid it” [lyrics: “Pick up something... anything and... run wid it”] comes up on loudspeakers. In his appeal to the public, shared on YouTube (see below), ASP Mystar made clear the legal ramifications of reactions to the tune. Reactions have reportedly included picking up a street vendor’s supplies (police interpretation: larceny) and picking up a woman and carrying her away from her partner (police interpretation: possible abduction).  ASP Mystar asked people to be “mindful” because “pick up something” does not apply to other people’s property and to other people.....

From fetes to concerts and bands on the streets, Trinidad’s Copyright Organisation has the details on the do’s and don’ts.

Of course, there are the usual rules that everybody knows (or should know) when attending any carnival – from Port of Spain to New York, London and Toronto. The Trinidad Guardian lists them for you again.

Rights issues over the years – In 2014, Carnival is a rights bacchanal

I streamed the stream

Up Close at Trinidad’s Carnival - What’s behind the raucous pre-Lenten rite?  The Smithsonian