We showcase new writing by Caribbean and Diaspora storytellers. There are competition opportunities in the Caribbean and beyond and news of successful Caribbean writers. Good luck in your endeavours!

The Burt Award: Do you have a great novel, creative non-fiction, or graphic novel for youth ages 12 to 18? The Burt Award for Caribbean literature is an annual prize given by CODE, a Canadian NGO committed to developing literacy world-wide. The Caribbean version of the competition is open to Caribbean nationals and submissions should be at least 20,000 words and suitable for readers aged 12-18. This year’s deadline is October 31, 2018.

Poet in the City is a project running as part of the British Library's marking of the 70th anniversary of the arrival of the Empire Windrush. For details on the poetry project and the Windrush exhibition, check our article.

Twenty-four outstanding stories have been selected by an international judging panel from 5182 entries from 48 Commonwealth countries. The writers come from 14 countries including Jamaica and Trinidad & Tobago. Profiles of the shortlisted writers and excerpts from their work can be found on the Commonwealth Writers page.

Opportunities for young and student journalists - awards and bursaries available from Spring into Autumn.

Described as the book every reggae fan should read, Broadcaster and DJ David Rodigan writes about his passion for the music in My Life in Reggae. Trevor Nelson reviews states that Rodigan’s “passion and energy for the music are unparalleled”. Order your copy in the UK or the US below.

Also, this expanded book on Montserrat gives you the chance to learn about Montserrat and its people. It includes crosswords on Arrow, word searches on calypso monarchs and pageant queens.

A great read for children - Jaden Toussaint: The Quest for Screen Time

and available in paperback and in hardback.

A book giving the photographic story of a group of Dominican-born US health care providers  who visited Dominica after the passage of Hurricane Maria has been published. Proceeds from the sale of the book, For Love of Country, will go towards the island’s rebuilding efforts. 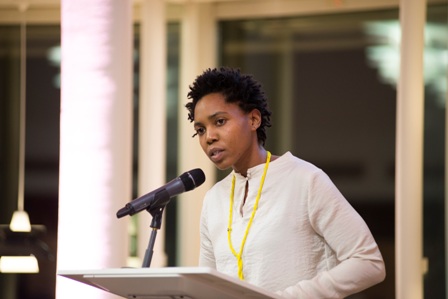 Poet Natasha Bryan was one of the shortlisted poets for the Michael Marks Awards for Poetry Pamphlets.

Natasha, who grew up in London with her Jamaican grandparents, read her poem Pins to an audience at the British Library.

The Marks Poetry Prize judges said of her collection If I Talked Everything My Eyes Saw that it contained "a magical and exhilarating variety of forms, addresses and voice, around mothers, daughters, friends and childhood, hospitals wounds and beating".

Natasha also shared her experience of getting to the Marks Prize shortlist.

Are you an aspiring poet? Find out more about the Marks Prize.

October 2017 - Time to get your nominations in for the 100 Great Black Britons during Black History Month.

New!!! The Ink Factory (THE NIGHT MANAGER) and Film London are partnering to find two exceptional interns for a three-month placement at The Ink Factory office. They are very keen to welcome applications from under-represented groups and will be paying the London living wage for the duration of the placement.

New: The Black Tudors The Untold Story - out now.

September 2017: The British Library looks at inclusive publishing and the experiences of Black and Asian writers and publishers.

To read more about the project and suggestions from Black and Asian writers and publishers, visit our article on the conference held at the British Library.

Caribbean, Asian and African publishers, HopeRoad, has announced support for the Postcolonial Studies Centre, at Nottingham Trent University, with a 3 years renewal sponsorship of a prize awarded to graduating students in English who demonstrate excellence in specialist fields.

HopeRoad will provide £50 worth of books from its catalogue to be divided between the two students whose work demonstrates the best originality and rigour in the field of postcolonial literary studies. Students will be nominated for the prize by their lecturers, and the prize will be awarded at graduation.

Windrush experiences - podcasts available from The University of London.
Summer viewing: Special films to mark 55 years of independence in Jamaica and Trinidad. CaribbeanTales-TV is dedicated to distributing older content from the Caribbean diaspora, so every month, along with new releases, it will be presenting classic original content – old favourites and new classics.
Click here to subscribe. 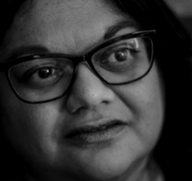 The Trinidad Guardian called her book "A tale of chocolate and terminal illness".

The Trinidad express said "Death, terminal illness, chocolate – it all melted into ‘The Sweet Sop’."

Other books by Ingrid Persaud If I Never Went Home

If Jamaica were an actor she would have appeared in more than 141 films. The list of movies where the name Jamaica plays a prominent part is probably closer to two hundred.

Jamaica The Land of Film by Peter Polak chronicles over one hundred years of international film making in Jamaica from 1910, and provides many previously unpublished details of locations, actors and directors.

As such, Jamaica, the Land of Film provides a comprehensive history which will be of great interest to all cinema aficionados and fans of Caribbean history. 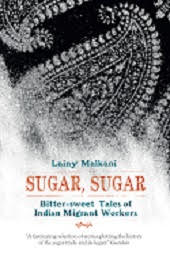 Inspired by historical documents between 1838 and 1917, and the living memories of the descendants of indentured workers, Lainy Malkani’s collection offers an Indo-Caribbean collection of tales with sugar at its heart.

The 5th Congress of Writers of the Caribbean has finished in 9 April. After a tribute to Derek Walcott, Rita Indiana was awarded the 2017 Grand Prix for her novel La Mucama de Omincunle released in 2015.

Rita Indiana Hernández was born in Santo Domingo in 197.

Listen to the France Caraïbe podcast.

Caribbean writers make it to the shortlist for the Commonwealth 2017 Short Story.

Twenty-one outstanding stories have been selected by an international judging panel out of almost 6000 entries from 49 Commonwealth countries.

Author Gardenia Destang wrote a blog for Caribbean Intelligence© readers. You can read Gardenia's blog by clicking here. More to read further down this page.

About our 2012 Short Story Competition winners
Caribbean Intelligence© announced Jennie D’Ambra from Victoria, Australia as the winner of our first short story competition held in late 2012.
Jennie’s story Box, which takes its inspiration from Guyanese-born, Barbadian-raised boxer Joe Walcott(later known in the US as Barbados Joe Walcott) was chosen unanimously by the team of judges.
Her story was described by one judge as having “the mysterious power of a folk tale and the excellent writingevokes first the harsh, cold life of the poor in Boston and then the brilliant sunshine of the Caribbean”.
The runner-up is Delroy Williams from Dominica for his story Cricket in the Streets, which tells a tale of a young boy facing down his fear, both with a cricket bat and beyond the field of play.
Delroy describes himself as a poet, but adds that he also enjoys writing short stories and that his influences are George Lamming, Michael Eric Dyson and Louise Bennett.
The theme set for the competition was to write about being “Connected to the Caribbean”.
Judges from British and Caribbean literary circles chose Jenni and Delroy from the global entries.
One of the judges, Elizabeth Smith, who runs the broadcasting consultancy Transforming Broadcasting and ran the Commonwealth Short Story Competition, said:  “The standard of the entries was high, evoking Caribbean imaginings and experiences. There is something special about the Caribbean that triggers exceptional short stories.”
Read about our winners.
Tweet
If you'd like to contact us, please email newwriters@caribbeanintelligence.com and caribbeanintelligence@gmail.com.

- Sharing a love of Caribbean writing with Wadadli Pen promoting literature in Antigua and Barbuda.Click here to find out more.
- Virtual book tour - Author Gardenia Destang has included Caribbean Intelligence© on her virtual book tour. Her tour started on 10 June. Keep checking this page for links to her journey as she talks about her book which reflects life in Florida, Chicago and Jamaica to write Becoming Me.
Jobs by AdView
jobs by