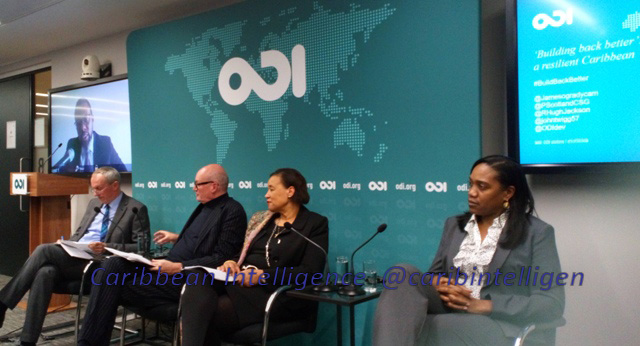 Dominica’s Prime Minister Roosevelt Skerrit had asked the international community not to forget his country after the cameras left and the post-hurricane repair work got underway.

Looking around the packed room at an over-subscribed conference organised by the Overseas Development Institute (ODI) in January in London, I realised that the Dominican leader need not have worried.

The ODI conference ‘Building Back Better’ a resilient Caribbean after the 2017 hurricanes attracted participants in London and, via a live stream, a distinguished international community looking at real ways to turn climate resilience into a strategy, rather than a slogan.

Their interest went beyond Dominica to long term hopes for a climate resilience template for all countries facing the impact of extreme weather.

Dominica-born Commonwealth Secretary-General Patricia Scotland told the conference that the Caribbean Disaster Emergency Management Agency (CDEMA) had done its work well and that it was already providing “a model I’d like to see replicated in other regions”.

‘Building back better’ has become the mantra of those seeking to help the Caribbean after one of the fiercest storm seasons since records began. However, this conference indicated that it was time to work out what ‘building back better’ will really mean - and how much that strategy will cost.

This was the start of the framing of a “how to” blueprint for making countries climate resilient.

Conference Chair and ODI Char James Cameron told the conference that the unusual 2017 hurricane season had “jolted the world awake” on climate change. He said that resilience planning was no longer a choice and that the world had to decide on “whether we can afford not to build back better”.

Conference participants delved into the nuts and bolts of the strategy being put together by Dominica and its global helpers.

Ms Barron told Caribbean Intelligence© afterwards that the outpouring of donor help will be channelled through an execution agency to deal with all the major capital projects needed.

“It [Hurricane Maria] really did affect us...in housing, in agriculture, in schools, the roads and buildings and infrastructure were damaged,” she told Caribbean Intelligence©.

She had pointed out during the conference that the ink had hardly dried on a previous blueprint following Tropical Storm Erika of 2015 when Hurricane Maria had struck in September 2017. It forced Dominica to “restrategise” its emergency policy and look to a long term re-positioning of the country in what will be a series of policy changes encompassing everything from alternative power to new legal frameworks, finance access and relocation of vulnerable communities.

The look of building back better

So what exactly will “Building Back Better” actually look like?

Caribbean Intelligence© pulled together some key points already being penned into the new strategies. The plans include:

For example, CDEMA Executive Director Ronald Jackson said during his video link that his agency had learned a lot about what could have been better. He called for planners to provide “carrot and stick” approaches to get people to build back better. “We know how to build back better at hurricane sites,” he told the conference, “what can we learn from that kind of rebuilding”.

“Don’t shy away from the politics”, he also urged, calling for bipartisan agencies for the recovery process.

Mr Jackson called up the example of Japan, learning from repeated earthquakes, and now at a stage where it can “pull out of a drawer” a template plan. He urged the Caribbean to avoid “the tyranny of the expedient” and take a long term view.

The ODI’s Principal Research Fellow, Dr John Twigg, idenditifed support work with local communities who were usually “the main actors in their own recovery”.  He told the conference that “we don’t understand those [community] processes well to see how we can support them more effectively.”

One of the priorities for the Dominican government itself is to build dedicated hurricane shelters and move away from the practice of delayed school reopening, caused by people are still using school buildings to live in.

Access to funding and a structured way of channelling such funds was also a top priority during the discussions.

Baroness Scotland repeated the concerns she had shared with Caribbean Intelligence© during her meeting in Bonn about telling a hurricane victim that she couldn’t qualify for aid because she was middle-income in the eyes of the Overseas Development Assistance (ODA) system. Her relating of this created a murmur around the conference room, bringing home the on-the-ground reality of disaster recovery versus the current rules of global finance.

Francine Barron repeatedly pointed out during the conference that, though progress is being made on changing the way the ODA classifies aid to middle income countries, time was running out with the 2018 hurricane season five months away.

She told Caribbean Intelligence© that global funds were needed now “to be channelled and used for all of these challenges” facing the new execution agency for strategic planning, public consultation and the management of funds for the big projects.

The conference also looked at what one participant called “a parallel conversation” about insurance.

The Commonwealth’s Secretary-General also identified potential new contributors to her toolkit for climate resilience. Mentioning Michael Bloomberg, she alluded to the structure voted the world’s most sustainable office building in Bloomberg’s Europe headquarters.

Participants also chipped in about applying this promised best practice template to the Spanish, French and Dutch-speaking Caribbean.

Dominica’s and the wider Caribbean’s friends contact book got larger and larger as the conference went on.

Baroness Scotland thanked the audience in the room and online for what they will be doing in the future. “Building back better for a truly resilient Caribbean is our shared ambition but it is an urgent and resounding rallying cry and far more than just a slogan,” she said.

Building Back Better: The Caribbean’s wind of change

The world’s most sustainable office building

Hurricane Maria - In quotes and pictures

Hurricane Irma - In quotes and pictures