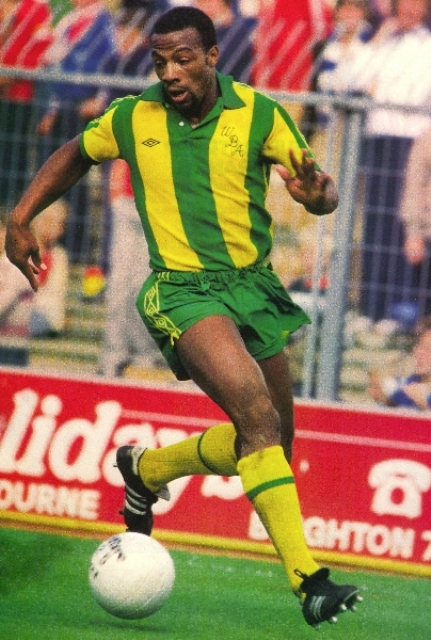 Tweet
“I was brought up three miles away from Wembley Stadium and passed it while sitting on the number 18 bus!” says Cyrille Regis as he fondly reminisces about his childhood in London near the iconic home of English football.

“Back then, in a young boy’s mind, Wembley Stadium was an awesome place and there were only two ways you could play there. One, if you played there for England and, two, if you played in an FA Cup final.”

During his career as a footballer and as one of the first black stars of the English game, Cyrille achieved both ambitions for country and club at Wembley.

For Cyrille, the long journey to growing up in Britain and becoming an iconic football personality began on the northern coast of South America. Cyrille was born in French Guiana to a St Lucian father and a French Guianese mother with ancestral roots in Guadeloupe.

When Cyrille was four years old, his father migrated to Britain. Cyrille moved from French Guiana to St Lucia with his mother and siblings for a year before joining his father in London.

As a young primary schoolboy in West London, Cyrille quickly became involved in a wide range of sports. However, cricket was the first sport which captured his imagination. “When I was at Kensal Rise School, we had an Australian teacher who taught us how to play cricket,” Cyrille recalled to Caribbean Intelligence©.

“Up to the age of 11, I played more cricket than football. I was a bit of a bowler and really enjoyed the game and I also did athletics. Football was, you know, just another sport I did without any real kind of passion.”

Despite his early enthusiasm for cricket, Cyrille began to devote most of his time and energy to football. He soon became a part-time footballer for non-League clubs in London.

Cyrille’s goal-scoring exploits as a striker captured the attention of team mates and managers. Some of them suggested to Cyrille that he could progress and become a professional footballer.

“I was just playing and enjoying football with my friends on Sunday mornings and for a youth club at church. With football, I loved the running around and the camaraderie but I carried on with my job as an electrician,” said Cyrille.

“It wasn’t until I went to Hayes [a non-League football club in West London] as an 18-year-old and they kept saying to me, ‘You’ve got a chance and there are some scouts coming in for you,’ that I realised that some people saw potential in me.”

Cyrille’s emerging talent attracted attention from a number of London clubs, including Arsenal and Chelsea. However, in 1977, it was West Bromwich Albion (West Brom) in the West Midlands who offered Cyrille an opportunity to play in the English First Division.

Cyrille made an immediate impression on the West Brom fans and scored twice on his debut against Rotherham United at West Brom’s stadium, the Hawthorns. Only two months before his debut, Cyrille was working on a building site and playing in front of average crowds of 500 people.

“I felt a mixture of fear and excitement which can inspire you or paralyse you,” said Cyrille as he shared memories of his debut with Caribbean Intelligence©.

“I scored two goals, including one penalty. I didn’t usually take penalties, but on that day, I took a penalty. I scored, scored another goal, and we won 4-0! From that match onwards, my career really kicked off.”

In 1979, players at clubs across England were also impressed by Cyrille’s performances for West Brom. Their votes helped Cyrille to become the first black player to win the annual Professional Footballers’ Association (PFA) Young Player of the Year Award.

“It was a special accolade, because it was from my fellow professionals who really understood the game,” Cyrille says with a firm sense of pride.

Laurie tragically died in a car crash in Spain in 1989. The impact of Laurie’s death led Cyrille on the path towards becoming a born-again Christian.

In Cyrille’s opinion, Laurie Cunningham was “the most watchable player I’ve ever seen”.

“Laurie was a tremendous player. He had grace, style, skill, and was rhythmical and beautiful on the eye. ‘Big’ Ron [Atkinson, West Brom’s manager] said that Laurie was the only man he knew who, if there was snow and he ran on it, he wouldn’t leave footprints. And that really encapsulates everything about Laurie.”

A year later, Brendan Batson, born in Grenada and raised in Trinidad and London, joined West Brom from Cambridge United. Batson’s first professional club was Arsenal, where he became their first black player. Batson had a distinguished career as a senior administrator for the PFA after his playing days ended.

Regis, Cunningham and Batson evolved at West Brom as Caribbean football pioneers. Never before had three black footballers played regularly together in the same team for a club in England.

Ron Atkinson, who quickly developed a flair for publicity opportunities, decided to call Regis, Cunningham and Batson “The Three Degrees” after the female African-American soul/pop group. The name stuck and has been used since to describe their collective impact at West Brom.

During the 1970s and 1980s, Cyrille and other black players regularly suffered from racist abuse from sections of the crowd at stadiums across Britain. At some stadiums, extreme far-right nationalist political organisations, including the National Front, openly attempted to recruit football supporters.

For Cyrille, the racist abuse he received during matches simply made him more determined to fight back and succeed.

As Cyrille explained to Caribbean Intelligence©: “When you went out there with 10,000 people abusing you….what do you do? It made you angry, but we learnt very, very quickly it was what you did with the anger that mattered. So we decided to use the anger as motivation.

“For me, it was all about showing them how good we were. It just inspired us to put the ball in the back of the net and run harder. We, as black players, were the focal point to a degree. But we couldn’t do that without the rest of the team, and the ([West Bromwich] Albion team in the late 70s and 80s was a great team to play for.”
Jobs by AdView
jobs by

In 1982, Cyrille’s exciting, muscular and instinctive style was acknowledged by England. He was selected to play the first of his five matches for England against Northern Ireland at Wembley. Days after his selection was announced, Cyrille received an anonymous letter with a bullet.

The letter warned Cyrille that he would receive a more lethal bullet if, as a black man, he played for England. Cyrille simply laughed off the threat and shared the letter with his colleagues at West Brom.

After extra time and the final whistle, Cyrille sank to his knees on the Wembley turf, overcome by a combination of relief, exhaustion and a deep sense of satisfaction.

“I’d played at Wembley for England, but to go there with Coventry for the first time in their history as underdogs was special. Nobody really gave us a chance, and some people were saying that we’d lose 2-0, 3-0 or 4-0,” Cyrille says in a defiant mood.

“But that’s what I love about sport. On the day, we played well and they [Tottenham] weren’t quite up to scratch.”

In 1996, after a short spell at Chester City, Cyrille retired at the age of 38 after 19 years as a professional footballer. Cyrille returned to West Brom as a reserve team coach before establishing himself as a football agent.

“Being an agent can be frustrating and hard work, and there’s a lot of travelling, but the part I love is the mentoring. I can tell young players, ‘Listen, this is what football is all about and it’s not all about your rose-tinted coloured view of it.’ I can talk about my life and how I overcame certain things,” Cyrille told Caribbean Intelligence©.

Cyrille is also an ambassador for WaterAid and a Trustee of the Christians in Sport organisation in the UK. In 2008, he received an MBE in the Queen’s birthday honours list for his services to football and the voluntary sector.

Years after retirement, Cyrille has had plenty of time to consider the impact he had with Laurie Cunningham, Brendan Batson and others on the careers of players who emerged later in the 1980s and 1990s.

“It’s only by listening to players like Ian Wright, Dwight Yorke, John Barnes, Andy Cole and David James telling their stories about how we inspired them, that makes me think about what we did,“ says Cyrille.

“At the time, you’re not aware about the effect you’re having on a 16-year-old from a similar background watching you play. But many of these players have said that watching Laurie, Brendan and me play made them think that, if we could do it, they could do it.

And that’s the real legacy of what we achieved. We inspired the next generation of black players.”
Tweet
Also by Colin Babb - An audience with Jimmy Adams
Caribbean Abroad - The Diaspora impact