CI Shorts: The G7 reaches out on sustainability 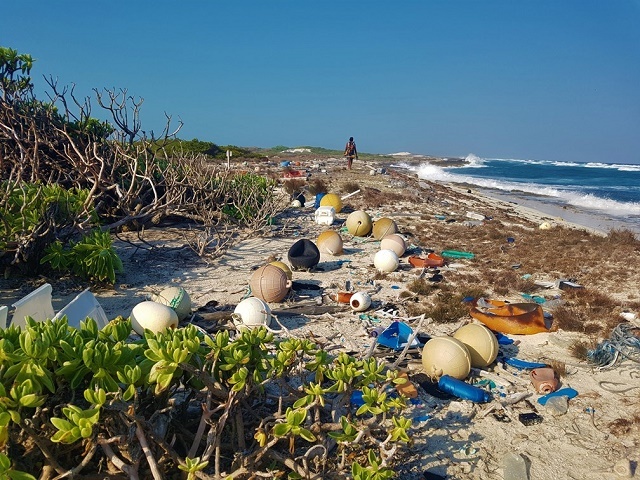 [The Seychelles News Agency reported that the team on Aldabra was no match for the amount of trash washing to shore on Aldabra. Photo: Seychelles Islands Foundation.]

Beyond the headlines of President Trump and his disagreement with his G7 colleagues, there was another meeting on the fringes of the G7 meeting in Charlevoix which was just as, if not even more, important to small states.

As Canada’s CBC reported on the G7 Outreach Meeting: “It's become a tradition at G7 summits to invite countries beyond the core membership of the group...It allows the core members to expand their discussions beyond their own group of wealthy nations.”

The global headline writers missed this meeting. However, the media of the representative governments reported in full on their country’s particular agenda at the round-table session with the remaining G7 heads.

As the host nation, Canada focused on discussing how to build resilient coasts and communities, shared ocean knowledge and science, and support for sustainable oceans and fisheries.

In a speech to the remaining G7 leaders, Jamaica’s Prime Minister, Andrew Holness, put the emphasis on climate change and how growing Caribbean economies are easily knocked back down by natural disaster. Here are some of the key points from his speech:

Mr Holness also tackled the issue of the way middle-income countries are graded financially: “More frequent and intense natural disasters currently pose an existential threat to the Caribbean and to SIDS generally, and expose deep vulnerabilities that transcend and make a mockery of per-capita income indexes as a means of graduation”.

He added: “Building resilience is not optional; it is an imperative for our survival. Creative and innovative solutions must be found to design appropriate risk mitigation, risk transfer and risk financing tools while ensuring wide participation in solutions.”

Seychelles President Danny Faure also addressed the meeting, emphasising his point with several large photographs of the damage that plastic pollution and other litter had caused in the Seychelles Aldabra atoll, which is a UNESCO World Heritage site.

He told G7 leaders that Seychelles and other small island countries already had enough of a challenge managing the waste that they produced. President Faure urged Canada to play a “prominent and proactive role” in UN negotiations this September.

On the issue of losing grant funding after being upgraded to a high-income country in 2015, the Seychelles leader said that the archipelago had turned to the option of a debt swap for ocean conservation and climate adaptation to find money to protect part of its Exclusive Economic Zone.

He added: “However, try as we might, such new sources of finance will not be enough to meet our sustainable development and climate action obligations under the 2020 Agenda, the Paris Agreement and the Samoa pathway for SIDS.”

President Faure called on the G7 and multilateral partners to agree on what he called a “SIDS-specific resilience index” that would take into consideration small island countries’ unique vulnerabilities to external shocks, whether due to climate change or economic factors.