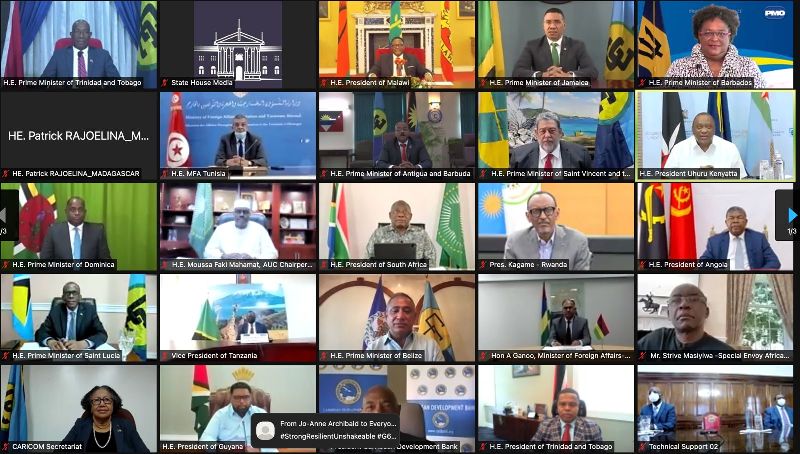 The word “historic” was on everyone’s lips as CARICOM and African leaders gathered in cyberspace to discuss closer ties in a post-pandemic world.

Spurred on by the global race for vaccines and increasing concerns over climate change, Caribbean leaders thanked Africa for its shared purchasing initiative, which started rolling out much-needed vaccine shipments in August.

Some of the speakers referred to the “African diaspora”, others spoke of Caribbean brothers and sisters. But the underlying sentiment was the same – the new world order made it imperative for the African Union (AU) and the Caribbean Community (CARICOM) to work together.

The 7 September event was billed as the first formal conference between the two regional groupings in living memory. Its theme: Unity Across Continents and Oceans: Opportunities for Deepening Integration, aimed at “Promoting closer collaboration between Africa Diaspora, People of African Descent and the Caribbean and Pacific region and institutions”.

In historical terms, the legacy of the post-war Caribbean lawyers, activists and others who had supported the pan-African movement loomed over the virtual proceedings. Trinidad & Tobago’s Prime Minister, Keith Rowley, fleshed out the historical context, citing the legacies of George Padmore, CLR James, Kwame Nkrumah and Dr Eric Williams. “[They] anticipated that this milestone could be reached,” the Trinidadian leader told the summit.

The current CARICOM Chairman, Antigua and Barbuda’s Prime Minister, Gaston Browne, set the tone and the agenda near the start of the summit. He called for the establishment of a Forum of African and Caribbean Territories and States that should meet every year. He suggested a bureaucracy-free founding charter for the forum, to be pulled together in six months. Prime Minister Browne also recommended making 7 September Africa-CARICOM Day.

Mr Browne said: “We must establish structures of co-operation to promote our mutual socio-economic interests, increasing investment and trade and people-to-people exchanges between Africa and the Caribbean. We should resist being pushed to the margins of international decision-making and collaborate on decisions to restructure the global financial architecture, on global taxation, de-risking, climate change and reparations, among others.”

The summit Chair, Kenya’s President, Uhuru Kenyatta, told the 69 participating countries and organisations that they had it within their power to demand change in the international system and fight for change and make it happen, but only if they acted harmoniously.

President Kenyatta said the pandemic had been a wake-up call: “United by our heritage...we meet today to start working together to confront the common challenges that face us.”

The summit had originally been planned for 2020. However, the same pandemic which caused the event’s delay provided the template and resolution for closer co-operation. Piqued by the rich country rush for Covid-19 vaccines, Africa had invited the Caribbean to join its African Medical Supplies Platform (AMSP). The platform, originally a pooled medical supplies resource, had been rapidly reconstituted under a South African-conceived taskforce to acquire and roll out vaccine supplies for Africa, with an extension to the Caribbean. In August, the South African President, Cyril Ramaphosa, who is the AU’s leader with responsibility for its Covid response, announced the vaccine agreement to pool purchasing power to acquire Johnson & Johnson single-shot Covid-19 vaccines for African and CARICOM needs.

The South African leader said: “This pandemic is a demonstration of the value and necessity of confronting challenges by working together. We mobilised vaccines for Africa and the Caribbean. We need to share our experience, expertise and technology to better respond to Covid and future pandemics. The pandemic has shown what is possible.”

The African Union Special Envoy and the businessman coordinating the AMSP, Strive Masiyiwa, outlined the basic structure of the platform at the summit. He said that the Africa vaccine acquisition team, under President Ramaphosa, had steered around the difficult vaccine acquisition task in a world where all suppliers wanted to be paid upfront and supplies “had already been hoarded”. The resulting US$3bn vaccine financing facility enabled 50% funding for the necessary vaccines, with donor community financing providing the rest of the money. The Johnson & Johnson vaccine had been chosen because it could be produced in Africa, it was the cheapest and it is a single-shot vaccine.

The March deal amounted to 400 million doses to be delivered over a 12-month period to 41 countries, including the Caribbean. The first shipments to six Caribbean countries are expected to be completed in October, with more orders expected. “We’ve had a fantastic working relationship... we can work together to face a major challenge,” Mr Masiyiwa said. “We are not only providing them with vaccines [but] with anything that they require that required a pooled financing arrangement.”

He urged Caribbean states to continue or start placing more orders. He told the summit: “We are ready to ensure that any Caribbean country that wishes to get vaccines, we will deliver to them hopefully before Christmas, so we can visit the islands, as I have done on many occasions.”

Barbados Prime Minister Mia Mottley had also played a role in laying the groundwork for deeper co-operation during pre-pandemic visits to Africa. At the summit, she suggested weekly direct flights between Africa and the Caribbean, even if these needed to be initially subsidised. The Barbadian leader also called for a joint public-private funding mechanism for development work, an African-CARICOM media exchange platform for news, information, culture and sports, and a co-ordinated approach to putting forward the case for reparations. Ms Mottley called for a joint approach to seek the reform of multilateral institutions which, she said, had been formed in the post-World War Two era and “not created with our existence in mind”.

Trinidad’s Keith Rowley, who also visited Africa in 2016, said that his country’s ties with Africa had already been established. Trinidad & Tobago has an ambassador at the AU, High Commissions in Nigeria and South Africa and honorary consuls in Ghana and Kenya, as well as its African Energy Initiative and plans for an African investment fund.  Mr Rowley told the summit: "We must also seek out ways to mend the socio-cultural dissonance derived from the legacy of slavery. Educational programmes, the development and promotion of genealogy or heritage tracing may prove instrumental in filling the knowledge and familial gaps."

There had been many expectations attached to the summit in the Caribbean ahead of the event. The Jamaica Gleaner’s editorial, “CARICOM-Africa Summit: Where kith and kin talk”, was typical of the regional optimism. During the summit itself, the feeling seemed to be mutual. The South African Broadcasting Corporation (SABC) live-streamed the summit with a virtual chat running. Applause and support comments and emojis from SABC viewers broke out in the chat feed during Mia Mottley’s passionate speech about African and Caribbean unity.

St Vincent’s Prime Minister, Ralph Gonsalves, wanted his fellow leaders to go further and look at bringing the people of African descent in Brazil into the forum. He also reminded the summit of Cuba and its role in shedding “its blood in the liberation of South Africa”. “We all know the selflessness of Cuba... We need to give a practical commitment to assist Cuba in its illegal blockade by imperialism and the ravages of COVID-19... Cuba will not ask, but it is our duty to assist and to do so with urgency,” the Vincentian leader told the summit.

There are plans for a CARICOM diplomatic mission in the Kenyan capital. Mia Mottley had unveiled a plaque for the business complex during a visit to Nairobi in 2019. CARICOM Chairman Gaston Browne told the summit: “Let us now create the pathways of accord between Africa and the Caribbean – an accord worthy of our historic and contemporary struggles to overcome the legacy of racism, colonialism, exploitation and global inequities.”

Communiqué from the first CARICOM-Africa Summit

Statement by CARICOM Chairman Gaston Browne to the Africa-CARICOM Summit