Oil and so much more – attracting investment for Guyana 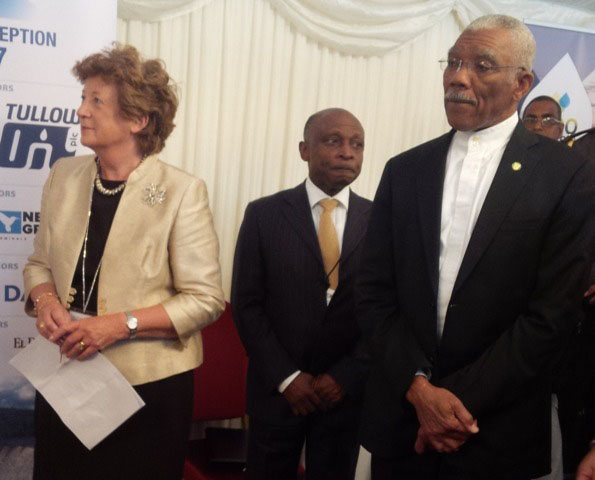 “We really are passionate about the environment.”

Not the words you’d immediately expect in a speech to investors from the leader of a soon-to-be-oil-rich state.

But that was the pitch from Guyana’s President David Granger and his delegation during a visit to London in early spring 2017. Their mission was to promote their country against the backdrop of Guyana about to become what the New York Times labelled in January as “the next big oil producer in the Western hemisphere”.

President Granger had a series of investors’ meetings in London in late April. The highest-profile venue was a reception organised by the Caribbean Council at the House of Lords’ banquet room which brought together business people, diplomats and politicians.

There has been mounting foreign interest in Guyana since the announcements in late 2016 and early 2017 of major oil finds which are scheduled for production in 2020.

The figures are big. Exxon Mobil and Hess said in January 2017 that Guyana had one of the richest oil and natural gas finds in decades. By March, Exxon Mobil announced a third discovery in an area it called “part of the significant exploration province offshore Guyana”.

In an April article entitled Could Guyana become the next oil hot spot?, energy specialist magazine Oil & Energy Insider estimated that the three finds by Exxon Mobil alone hold between 1.4 billion and two billion barrels of oil equivalent. The magazine said that, after the oil starts to flow in 2020, daily output from these blocks alone could reach 450,000 barrels a day by the mid 2020s.

Oil and environment do mix

The Guyanese are staying calm. There was no oil boom talk when President Granger and his team visited London shortly after the Guyana oil global headlines.

The Guyanese leader’s message was clear at meetings with investors: while the oil discoveries are projecting Guyana into foreign investor attention, his country had so much more to offer.

He told his audience at the House of Lords that Guyana could look after its new oil potential while also being conscious of its “powerful environmental product”.

President Granger urged potential investors to look at the “added value” that Guyana wants to bring to its traditional bauxite, manganese, timber industries and the potential to add value to its rice and sugar products.

Guyana’s Foreign Minister Carl Greenidge is pressing home the country’s message on both managing the oil wealth and on a strategy to use the opportunity to reel in investment for non-oil production and capacity.

“The government has been trying for quite a while to attract investment in areas in which Guyana has quite a special advantage,” Mr Greenidge told Caribbean Intelligence©.

At the moment, manganese, the mineral in your mobile phone battery, is understandably an important resource. Mr Greenidge says that manganese mining will recommence in Guyana within the next 18 months.

Chinese investors have already spotted the opportunity and signed up to manganese mining and production in Guyana late in 2017.

Mr Greenidge outlined for Caribbean Intelligence his nation’s plans for investment in forestry, telecommunications, agro-processing, port infrastructure, marine and transport infrastructure, not just in Guyana, but also making links through to one of its neighbours, Brazil.

These positive notes from the Guyanese delegation naturally also draw attention to the country’s other neighbour, Venezuela, whose decades-long territorial claim on nearly two-thirds of Guyana is now reaching the final negotiation furlong.

When Venezuela queried the original 1899 border agreement, a 1966 agreement was reached to agree to resolve the border dispute. The two countries have been in arbitration ever since, with Caracas raising the issue on a regular basis.

The 1966 Treaty of Geneva was supposed to settle a framework, followed by an accord in 1970 and subsequent claims and counter claims from 2011 to today. The Venezuelan claims grew more forceful, however, after Guyana’s initial oil finds in 2015.

While Venezuela is facing its most high-profile internal civil strife in decades, things will come to a head externally at the end of 2017. That is the United Nations deadline for the long-running negotiations before the whole issue is kicked into the courts. A UN mediator was appointed in February 2017 for the final attempt at negotiation.

Venezuela has suffered more than a month of protests, for and against the Maduro administration, which have claimed lives on the streets of Caracas. Caribbean Intelligence asked Mr Greenidge what Guyana can do when his neighbour’s house appears to be burning down.

“Let me put it to you somewhat differently,” he responded, “Our major preoccupation, our major concern at this point in time is to deal with Venezuela’s claim to our territory.”

He pointed out that 30 years of dialogue “without fruit” has left Guyana using the last available peaceful option of negotiations. If this last round of negotiations does not bear a solution by the end of 2017, the UN and Guyana are agreed that the issue will go to court.

“We have no problem going to court,” Mr Greenidge told Caribbean Intelligence.

“You cannot go to arbitration, be awarded territory that you didn’t have before, and then suddenly decide that you want some more and not even give up what you received before.”

The UN and Guyanese solution is to take the border dispute to the International Court of Justice (ICJ) at year-end if an agreement is not reached by then. There is just one glitch: Venezuela doesn’t recognise the ICJ.

On the continuing Caracas protests highlighted every day in the hemisphere’s media, Carl Greenidge said that the problems in Venezuela were having an impact on the entire region, with Colombia at the forefront, while Guyana and Trinidad were also feeling the spillover repercussions.

Guyanese diplomat Sir Shridath Ramphal had told the national Guyana Chronicle that it would be a wise move for the country to prepare “properly” for the oil, secure it and also “get rid of the Venezuela issue”.

The diplomat, whose previous posts have ranged from Guyana’s Attorney General to Commonwealth Secretary General, currently serves as an adviser to the Guyanese government on the border issue with Venezuela.

Mr Greenidge separates the oil issue from the territorial dispute with Venezuela.

“We try to be careful in relation to our sovereignty. Our first concern is our sovereignty and we are working on that. The oil is a sideshow. Venezuela’s claim on Guyana preceded this,” he told Caribbean Intelligence.

Guyana’s officials are keen to manage their future oil wealth sensibly. Having seen other formerly oil-rich countries now struggling with diversification and with falling oil prices, Guyana is determined to put in place a strategy to use the proceeds efficiently and store some away for future prosperity.

Key to this is the proposed sovereign wealth fund. The Minister of Foreign Affairs describes it as allocating “a portion of the overall revenues...in a manner so that it can be shared with succeeding generations”.

Secondly, says Mr Greenidge, the strategy will ensure that there is a transparency of contracts as part of the oil regulation process.

The third main pillar of the strategy is to make sure that managers are appointed on the basis of competence, avoiding the labels of nepotism and oil corruption attached to so many countries which became oil rich in the 1970s and 80s.

One of Guyana’s partners in exploring and now producing one of the areas seems to indicate Guyana’s determination to get this right.

Tullow Oil, which started with African oil finds, now bills itself on its website as Africa’s leading independent oil company. Following its production partnerships in Kenya, Uganda and Ghana, Tullow is now conducting surveys in Jamaica and Suriname and is the partner for a third area in shallower waters than the Exxon Mobil Guyanese’s two fields.

Tullow’s Exploration Director, Angus McCoss, described the area in Guyana as “one of the most attractive unexplored areas of oil in the world” when he addressed the Caribbean Council reception.

Tullow has been emphasising how it fits the partnership profile being sought by Guyana.

Dr McCoss outlined the Guyana/ Surinamese exploration “hot spots” and also explained how the company’s partnership strategy will be to share the prosperity through contracting global suppliers who sub-contract locally and target the development of local people development through on-the-job experience.

Tullow’s Dr McCoss described himself at the House of Lords reception as a geologist interested in the oil industry “with respect for the environment”.

“A country rich with natural resources is both a great opportunity and a great responsibility...we must be careful to produce oil in the most responsible way,” he told the business reception.

Strong on and off shore

The message on sustainability, spreading the wealth and investing in the “green economy” side of Guyana received top billing during the Guyanese promotion mission to the UK .

The UK Foreign Office Minister responsible for the Caribbean, Baroness Anelay, praised Guyana’s “pragmatism” in sorting out its oil and the “strong development of the economy”, including its eco-tourism aims, when she spoke at the House of Lords reception.

President Granger spoke of what he called “a powerful environmental product”, adding that Guyana can be “environmentally conscious” while also seeing to new oil potential.

“We are taking our time,” he told the business people and politicians.

”We are not in a mad rush to spend.

“We are looking around the world for best practice. We are making sure that, when the oil comes on shore, it will be for the benefit of our Guyanese people.

“We know that we have a tremendous amount of petroleum offshore, but at the same time as we have a full environmental product onshore.”