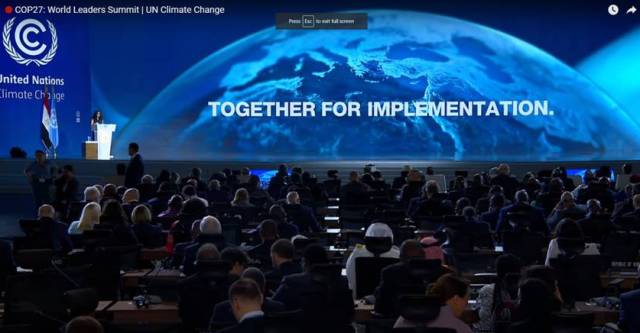 *The term is used loosely in this article, many times to mean that achievements are touted as being big solutions to the climate crisis, when they are minor steps along the road.

The world cannot allow greenwashing of the 27th Conference of the Parties (COP) on the United Nations Framework Convention on Climate Change (UNFCCC). It only lulls the global population into the false sense that we are somewhat near to the goal of a 1.5-degree limit in the increase of global temperatures (the scientifically-backed fairly-safe increase) or even a 2-degree increase. The world is in what seems to be an irreversible climate crisis. At current rates of greenhouse gas emission and temperature increase, the Climate Action Tracker estimates that the world’s temperature is set to increase to 2.7°C by 2100, which will mean untold disaster, loss of lives and livelihoods.

While there has been the much-celebrated victory of acceptance and pledges to loss and damage provisions (the concept that rich industrialised countries should finance the recovery needs of developing countries suffering from slow onset and extreme weather event damage), we are no closer to climate safety.

Let’s make a few points absolutely clear in the aftermath of COP27:

A list of things that have not changed with COP 27 could be never-ending, but that is not the point of this exercise. The point is to have sober and, hopefully, meaningful reflection on the successes and failures of the COP. I unfortunately, cannot agree with the statement from the Alliance of Small Island States (AOSIS) Chair, Molwyn Joseph of Antigua and Barbuda, that “the international community has restored global faith in the critical process that is dedicated to ensuring no one is left behind.” While it was a victory for SIDS, we cannot allow ourselves to participate in any greenwashing of global climate diplomacy. That serves us no benefit in the Caribbean. Accomplished climate ambassadors such as Dr. Dessima Williams of Grenada, Angus Friday, Dr. James Fletcher of Saint Lucia, Former CARICOM SG Irwin LaRocque, hard-working technocrat negotiators from around the region, and even Minister Joseph himself, and many other soldiers, have battled too hard over the years to permit greenwashing.

Small Island Developing States have been advocating for Loss and Damage provisions since 1991! AOSIS has been leading the global climate action battle for decades. Global media coverage and opinion have acted as if this push to have Loss and Damage considered was something new to COP27. More greenwashing. The AOSIS has said it was an “arduous journey to finally achieve the adoption of loss and damage finance. We consider it a moral victory, a first step, that has evaded our grasp for much too long.”

The reality is, while this is a victory, SIDS, nor the rest of the world can wait another 31 years for the pledges to be fulfilled. The idea that now is the moment that Global North and industrialised countries (many of them former colonisers) will contribute to funding a loss and damage arrangement is at best, sketchy, and at worst, absolutely not going to happen. This loss and damage pledge is essentially an agreement to pay climate reparations. Industrialised countries have not shown the inkling or desire to commit to it  for 31 years. Apart from that, this commitment to loss and damage payments, while morally the correct thing to do for Global North countries to accept and pledge, they may find difficulty executing. Countries like England, France and Spain could find themselves on the slippery slope of reparatory payments; if they can accept reparatory payments for climate change, where does that leave them when it comes to reparations for indigenous genocide and brutal enslavement of African people.

1.5 To Stay Alive … the Unachievable Dream

With each passing year, the dream of a 1.5-degree limit to ensure the region’s survival and adaptation to the climate crisis becomes more of a pie in the sky idea. The world is simply not close enough to net zero fossil fuel emissions becoming a reality. The hard work of 20+ years by the Caribbean, AOSIS, African countries, the High Ambition Coalition and SIDS in general, that culminated with the landmark Paris Agreement in 2015, is close to the drainhole and has started slipping into never coming to be. The temperature increase forecasts mentioned earlier support this position. The Paris Agreement was the summit of climate accords.The necessary steps needed to pull back the crisis were written in black and white then. Nationally Determined Contributions have become more and more ambitious from the smaller countries with less ability to impact the global situation, while bigger countries have been back-sliding on their commitments.

The Damage of Continuous COPs

The viral image of the stunning number of private jets arriving in Egypt for the COP was a shocker to many. Private jets produce significantly more emissions per passenger than commercial flights. The BBC reports that between November 4-6, 36 private jets landed at Sharm el-Sheikh for the COP, and a further 64 flew into Cairo. The amount of greenhouse gas emission being generated annually by the COP, compared to the results it achieves is becoming laughable. The private jets issue is just one instance of how COPs could be doing more damage than good. The global community and the United Nations must reconsider the value of the annual Conference of the Parties in its current format. The developing world is tired of COPs.

At one point, SIDS, in the Pacific and Caribbean, low-lying islands and coasts, were the countries and areas seen to be on the frontlines of the battle against climate change - the countries expected to be battling the effects of rising sea levels first. The earth is beyond that point - extreme heat across Europe and Asia, “apocalyptic floods” in Pakistan, drought across the Horn of Africa, continued devastating hurricanes, rainfall and invasive species in the Caribbean, and wildfires in North America. The entire world is now on the frontline. The distinguishing difference remains that smaller, developing countries are not the big emitters, they cannot force the industrial powers and the Global North to do right by the earth and cut emissions, and they do not have the financial and technological resources to pull themselves up and out of danger.

One of the popular discussions of onlookers to this year’s COP was the fact that during the conference, the world population officially crossed 8 billion. The peddled fear is that more people equals greater greenhouse gas emissions and more environmental damage. While statistically that may be so, it is absolutely not the cause of the emissions crisis that the world is experiencing. An argument that has been advanced is that overpopulation (mainly in black and brown majority countries) and the continued growth of the global human population is triggering further climate disaster. The indisputable fact is that emissions inequality characterises the problem. Carbon Brief reports that, between 1990 and 2019, the top 1% of emitters increased their emissions by a whopping 26%. “The average carbon footprint of the top 1% of emitters is more than 75 times higher than in the bottom 50%.” What does all of this mean? The world’s richest people in North America, East Asia, Middle East & North Africa, and Europe are the ones who are the biggest polluters. Not the working class masses in India, China or Africa. State action is vital, but the private trillionaire, billionaire and millionaire world must be involved. No green or rich-washing!

Some of those countries still use coal as a main source of energy. Take India for example. India has to consider how it will get to net zero emissions … will it skip the natural gas step? There has been great pressure on India to cut its coal production plans and eliminate its coal usage. The USA’s greenhouse gas emissions are almost 8 times higher than India’s, yet the same type of pressure is not demonstrably applied to the US. Friends of the Earth Africa has been insisting on an equitable phase out of all fossil fuels. What disadvantages will that present to the Indian and African populations that have not had the benefit of countries like the USA and UK of using coal with climate impunity to further their industrial and technological revolutions. India (1.4 billion), set to overtake China (1.452 billion) as the world’s most populous country in 2023, still has lower emissions than China and the USA (population of 332.4 million).

More and better representation for the Caribbean is needed on the global climate action front. Barbados Prime Minister Mia Mottley is a rockstar global leader and the world listens to what she has to say. Antigua and Barbuda Prime Minister Gaston Browne is a general on the SIDS climate action front, but these two soldiers cannot be the only highest level representatives from the region. Ministerial, technical negotiators are no longer enough to make the region’s voice loud at COPs. At each COP, Caribbean prime ministers need to put aside whatever other responsibilities they may have and attend the COP. Make powerful and dramatic presentations that get the message to the leaders of the big GHG emitters, line up interviews with international media, use their diplomatic skills to press for meetings with the leaders of the Global North. Forget what the national opposition may say. There is no greater crisis than the climate crisis. The CARICOM Secretariat must coordinate all regional heads of government and present a united front with a unified message on climate change.

Prime Minister Mia Mottley called for drastic reform of the IMF and World Bank to help finance recovery and climate action. Reality is, these institutions, created out of Bretton Woods are not suited for 2022 climate crisis needs. They are post-war dinosaurs. What is needed for the reform of the IMF (a certain change of congressional support in the US) is out of the reach of SIDS activism. We must look elsewhere. The pressure on fossil fuel companies and their duty to start loss and damage funds must start now!

Donald Trump’s mid-COP announcement that he will compete in the 2024 presidential election is an ominous threat to keeping the USA on the climate action train. While the first meeting between US President Joe Biden and Chinese President Xi Jinping distracted from the COP, it signalled that US-China climate action cooperation could soon be back on track after the Nancy Pelosi-Taiwan bungle and China’s subsequent halt in cooperation. It shows that the world’s biggest emitters allow squabbles over political differences to endanger the entire planet.

What do we do now? Stop greenwashing and get serious about climate action and activism!

Jabari Fraser has worked as a journalist, development communications manager and foreign language interpreter in Trinidad and Tobago and the wider Caribbean region. He has been writing about the protection and preservation of the Caribbean Sea and disaster risk reduction for the last six years. He is currently researching Caribbean and SIDS' oversized impact on global climate action and diplomacy.