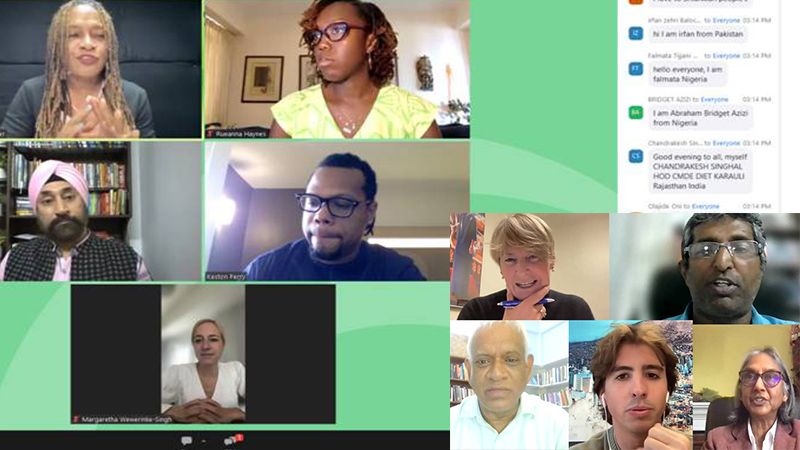 In the countdown to COP27, the climate change concerns of the Caribbean have come under scrutiny at a series of high-profile events.

With the region already suffering the ravages of increasingly unpredictable weather patterns, attention has turned to how its islands might benefit from the creation of a “loss and damage” fund, an idea which dates back to the 1992 United Nations Framework Convention on Climate Change.

It was specifically named in the 2015 Paris Agreement and received more impetus in the 2017 Warsaw International Mechanism on loss and damage (WIM) at COP13.

Caribbean nations and other small states see it as a way of exacting a cost from the world’s major polluters – and they want it to take centre stage at the COP27 conference, to be held from 6 to 18 November 2022 in the Egyptian resort of Sharm el-Sheikh.

Their strategy so far has been to pursue it as both a lobby point for COP27 and a legal pathway through the Loss and Damage Collaboration. This is a collective effort under the umbrella of the Commission of Small Island States on Climate Change and International Law (COSIS).

The Commonwealth and climate change

Speakers at climate webinars ahead of COP27 made it clear that the concept is not about aid, but about reparations funded by a tax on oil and gas firms and from countries causing the most climate damage.

The fund would be used to help vulnerable countries build up their ability to cope with climate damage and also fund climate adaptation - the transition to sustainable sources of energy.

“Climate reparations are absolutely essential,” political economist Dr Keston Perry said on 25 October during the Commonwealth Foundation webinar entitled Climate Reparations: What must COP27 deliver. He described it as “facing up to these [climate] facts about how we are here”.

From oil-rich to green

Smaller Commonwealth countries enjoying the wealth of fossil fuel extraction also came under scrutiny. An Institute of Commonwealth Studies (ICwS) webinar, entitled Challenges to Green Transition: The case of Guyana and Trinidad and Tobago, explored the support needed for oil-rich but vulnerable states to move to green energy. This webinar included academics from the University of the West Indies (UWI), the University of Guyana (UG) and the United States.

Janet Bulkan, associate professor in the Department of Forest Resources Management at the University of British Columbia and a member of the Council of the Commonwealth Forestry Association, told the ICwS webinar that the Global North had failed to give the right signals or support to these Caribbean states, instead courting them to extract as much of their oil and gas resources as possible.

“The oil goes north… Guyana will be left with the cost of rising sea levels…  the digging of wells in an unaudited way,” Dr Bulkan said.

UG’s senior lecturer in the Department of Economics, Thomas Singh, argued for more support for a “Green Institute” with a carbon tax, from which Guyana and Suriname could use to fund a regional co-operation strategy for energy transformation. “Energy co-operation is going to be costly,” Dr Singh told the discussion.

UWI St Augustine Prof Roger Hosein spoke of the “resource curse” for Trinidad, Guyana and Suriname, adding that incentives were needed to push for a strategy for green transition. He said that CARICOM had been talking about regional co-operation on energy for years. He added that the war in Ukraine had increased oil incomes and “reduces the drive” to make deep-rooted changes in energy strategy.

“Money is there in the background,” he said. “We [people in these societies] want our share of the money.”

He said that international pressure would be needed to push any of these countries to plan beyond fossil fuels.

ICWS webinar: Challenges to Commonwealth 'Green Transitions': The case of Guyana and Trinidad and Tobago

What can COP27 deliver?

The Commonwealth Foundation webinar focused on tangible action at COP27.

Harjeet Singh, head of global political strategy at Climate Action Network International, also serving as global director, outlined a workable timetable which would establish agreement on a loss and damage structure at COP27, spend a year bedding down the funding details and then consider additional funding structures.

International climate law and governance specialist Rueanna Haynes said that agreement on the details would not be needed at COP27, just agreement for a loss and damage fund.

Africana Studies political economist Prof Keston Perry at Williams College in the US said that after 30 years of talking about the global debt on climate change, it might take another 30 years if COP27 did not agree to pin down an agreement on climate reparations. Dr Perry warned against the fund agenda getting “hijacked by Global North countries”. He added that it is “not a situation where we can delay, delay, delay”.

Dr Mahmoud Mohieldin is the host government’s climate action champion for COP27. He told the Foundation webinar that a climate action agenda would seek binding agreements. He said that countries which had delivered on their COP26 promises needed to be praised and that some discussion in Egypt was needed to focus on the proposals for debt reduction and debt swap.

Given that the webinars had been organised by the Commonwealth Foundation and the ICwS, the role of the Commonwealth came up at both discussions. Some of the participants argued that the organisation was in the best position to make sure that the voices of vulnerable states were heard – but only if the Commonwealth faced up to its colonial past.

“The plantation never left Guyana,” Dr Bulkan told the ICwS webinar, arguing that a strong green transition strategy for Guyana would happen only if it developed a multi-stakeholder approach to its new oil wealth which moved beyond state control.

At the Foundation webinar, former Trinidad and Tobago diplomat Rueanna Haynes, who has negotiated for the Caribbean Community as well as the Alliance of Small Island States (AOSIS), said that the Commonwealth was well positioned to “amplify the voices of the vulnerable”. She added that the Commonwealth had a responsibility to face up to its “history of exploitation”.

Harjeet Singh, a global expert on the issues of climate impacts, migration and adaptation, said that rich Commonwealth countries needed to “recognise that this is a question of reparations” but the Commonwealth needed to find a way to phrase this thinking.

Both discussions focused on the importance of the upcoming COP27 to press home the case for a climate adaptation funding strategy.

In the news conference following the ICwS webinar, Caribbean Intelligence© asked the panel how they could persuade the Global North to pay more than lip service to the loss and damage proposals.

Harjeet Singh said it was in the interest of rich countries to address the issues and show global leadership. He said global economies were intertwined: “You cannot talk about solar panels to people who have lost their homes.”

“This is the time for rich countries to show empathy,” he added. “Imagine what inflation, food and the energy  crisis has brought to the ordinary people and then, on top of it, they’re also facing climate impact.

“Second, we know who has caused the problem and who continues to cause the problem – fossil fuel companies – and they’re making money out of this crisis... so tax them, penalise them.

“We know who has caused the problem and we know the solution. We need the political will from the Global North.”

Debbie Ransome is the Managing Editor of Caribbean Intelligence.

Why Greta isn’t going to COP27