Antigua and Barbuda says "Thanks" 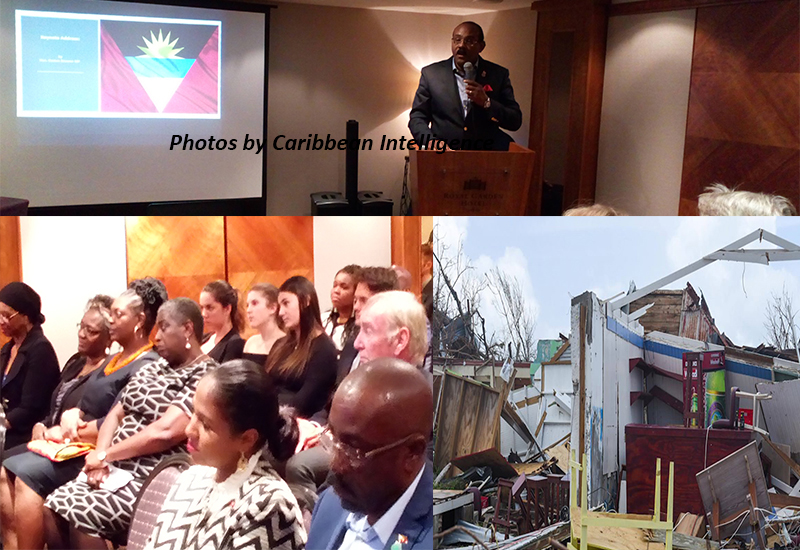 On the fringes of the Commonwealth Heads of Government Meeting (CHOGM) in London, Antigua and Barbuda's Prime Minister Gaston Browne and his team said "thank you" to the Diaspora community which has raised thousands to help repair Barbuda after it was devastated by Hurricane Irma last September.

Prime Minister Browne, his Foreign Affairs Minister Chet Greene and Housing Minister Maria Bird-Browne (wife of the prime minister) met the Diaspora community and then donors to outline how much had been raised and what it had been used on.

The UK Diaspora raised £100,000 and collected seven containers in supplies for devastated Barbuda. Caribbean Intelligence had a chance to discuss the collection work with relief committee members who also shared pictures of the damage done, the repair work being done and a general sense of life in Barbuda seven months after Irma.

Relief people slept in tents during their visits to Barbuda as the hotel there remains a broken frame. They report that, to March 2018, around 500 Barbudans had returned to their island.

Prime Minister Browne said that 100 homes have been repaired in Barbuda but the 400 homes which had been completely demolished would provide a "more daunting task".

The airport terminal has been restored, repairs have taken place on the Barbuda Council building and the island's only secondary school. Work will start later on the primary school.

There are plans for a new runway in two months' time and a new seaport to double cruise tourism activity.

Prime Minister Browne thanked the donors at the special reception and pointed out how important Diaspora and friends' support has been in the environment of aid pledging.

He said that it had been an "extremely daunting task" to get his country's share of promised aid money.

While some developed countries had committed to aid and hurricane relief as part of the global headline reaction to Hurricanes Irma and Maria, Prime Minister Browne revealed that some countries had put the aid into their own territories only, rather than across the Caribbean.

The Antiguan leader said that his country had found that "games are played" at global pledging conferences.

The UK, Prime Minister Browne said, had shown that "there is still good human co-operation rolling".

"Many nations are not as generous as you are," Mr Browne  told his donor audience.

Barbuda seeks to restore "normal" after the hurricanes