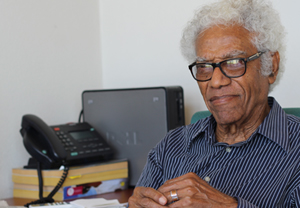 Tweet
On a particularly warm August day, George Lamming is ensconced in his modest but well-equipped air-conditioned office, which enjoys a spectacular view of the Caribbean Sea.
Three books are prominently displayed on his desk:  William Shakespeare’s Othello, Frantz Fanon’s The Wretched of the Earth and David Macey’s Fanon: A Biography.
The distinguished Barbadian novelist, essayist and poet has finally returned home.
He has spent more than 50 years as a writer and intellectual at several universities and institutions across the world, including frequent stints in North America, Africa, Australia and India.
Born in 1927 into a materially impoverished female-headed household on the outskirts of Bridgetown, Barbados’ capital city, George Lamming quickly became aware of his immense wealth of literary talent at the Combermere School, nurtured by his English teacher, Frank Collymore.
Eighty-eight years later, the silver-haired literary icon is currently an honorary professor at the Errol Barrow Centre for the Creative Imagination (EBCCI) at the Cave Hill Campus of the University of the West Indies (UWI) in Barbados.
Globalised islands
For Lamming, the Caribbean is a unique geographical region and its people occupy an important global position.
“Globalisation, the buzzword of the age, started in the Caribbean. Its population is drawn from every branch of the human family,” he told Caribbean Intelligence©.
“The Americas, in terms of its indigenous people; Africa; Europe; and Asia, with respect to our Indian, Chinese and Indonesian populations.
“We have produced a new kind of global family in this region over the course of the past five centuries through the process of conquest, slavery and colonialism.
“In a nutshell, Europe erected its institutions on a base of African and Asian labour in this region.
“That has given us a particular kind of sensibility. You throw a West Indian or Caribbean person into any social situation (in Europe, America, or Africa for instance) and he or she will operate as if they have always inhabited the place. There is no sense of estrangement.”
London times
George Lamming’s critically acclaimed novels and essays have concentrated on themes of history and identity, especially racial identity.
His now-classic autobiographical novel (which has become part of the English literature curriculum for Caribbean secondary school students), In the Castle of My Skin, provides stark insights into the life of an adolescent growing up in the racially segregated Barbados of the first half of the 20th Century.
After working briefly in Trinidad, Lamming emigrated to England in 1951, where his prose and poems were featured on the BBC’s Caribbean Voices programmes, alongside the works of fellow writers such as Derek Walcott, Samuel Selvon and VS Naipaul.
His early literary output was published in Bim magazine, also edited by his teacher Frank Collymore.
In the Castle of My Skin, his first novel, was published in London in 1953, winning a Somerset Maugham Award.
That book was championed by the late French Nobel laureate, Jean-Paul Sartre, and by African-American novelist Richard Wright.
Wider recognition of his oeuvre led to the award of a prestigious Guggenheim Fellowship, affording him the opportunity to travel to the USA, the Caribbean and West Africa in the 1950s.
His other novels include The Emigrants (1954), Of Age and Innocence (1958), Season of Adventure (1960), Water with Berries (1971) and Natives of My Person (1972).
The Pleasures of Exile (1960) is his critically acclaimed collection of essays which draw on Shakespeare’s The Tempest in defining the identity of the West Indian in a post-colonial context.
Lamming was a writer-in-residence and lecturer in the Creative Arts Centre at the Mona campus of the University of the West Indies, from 1967 to 1968.


Cuba and the Caribbean
The 88-year-old with an abundant and infectious sense of humour expresses hope about recent developments in the relationship between Cuba and the United States.
He thinks it will only bode well for the Anglophone Caribbean.
“I know Cuba. I have spent a lot of time there,” he says. “Cuba after the Fidel Castro revolution always saw itself as an integral part of the Caribbean region even though the Americans never wanted to see this linkage flourish.
“The Cuban outreach has been cordial and consistent. The Cubans have been generously giving free medical care to thousands in our region.
“They have also provided hundreds of scholarships to people in our islands to study in various disciplines in Cuban universities.
“This is not about to end in the present rapprochement between Cuba and America.”
Latest work
Recent works include The Enterprise of the Indies (1992) and Sovereignty of the Imagination, Language and the Politics of Ethnicity – Conversations III (2009).
Last year, Lamming won a Lifetime Achievement Prize from the Anisfield-Wolf Book Awards.
In his current role as honorary professor, Lamming gives lectures on creative writing and consults with groups of postgraduate literature students at the eponymous George Lamming Pedagogical Centre of the UWI Cave Hill campus in Barbados.
He also consults with individuals and institutions across the mainly English speaking Caribbean region on aspects of Caribbean culture – a subject about which he is quite passionate.
Lamming believes the time has come for the creation of a University of the Caribbean which brings together the considerable scholarship across the Anglophone, Francophone, Hispanic-speaking and Dutch-speaking territories of the region.
He says that Cuba's role in this proposed institution will be critical, given its notable developments in medicine, the arts and humanities.
With undimmed passion for the Caribbean region and a rich personal literary legacy to draw from, George Lamming will be making a contribution to Barbados and the world for a long time to come.
John Stevenson is a Barbadian freelance writer and broadcaster who has been based in the UK for the last 15 years.
Tweet
Caribbean Intelligence: Your one-stop shop for informed writing on the Caribbean and its Diaspora.