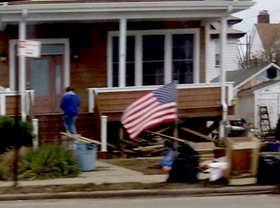 Christene Ross, a tech professional who lives in the coastal Brooklyn district of Canarsie in New York, lost more than $40,000 worth of food, exercise and computer equipment when superstorm Sandy left half her home under water.
On 6 November, she wrapped up warm and waited two hours outside her polling place on one of the coldest days of the season so far, with a determination to vote, akin to what we as West Indians know as "a bad mind".
"President Obama is the one who will stand up for women like me," she said, "from issues like equal pay for women, to affordable education, health care reform and saving jobs."
Many like her had been without power at home since Sandy struck on 29 October.
But even after a week of sleeping in cold, dark homes and being left stranded by broken transportation systems, with no gas for their cars and dwindling food supplies, West Indians joined the long lines of Americans across the country, hell bent to vote on Election Day.
Ms Ross moved here from Trinidad in the 1980s. Like many before and after her, she has always been a Democrat.
Historical ties
According to this year's vote count, 81.4% of Brooklynites voted for Barack Obama.
But his support in West Indian districts is likely to be in the mid 90% range.
In 2008, when 79.5% of Brooklyn voted for Mr Obama's first term, votes from West Indians amounted to 91%.
Errol Louis, Daily News political columnist and television host of NY1's Inside City Hall, says this trend took off long before his ancestors arrived here from Trinidad.
"In the 1930s following the Great Depression, FDR brought a number of different groups into the Democratic Party and one of those groups was African-Americans," he explains.
Mr Louis says much of politics and identity in America is defined by race, and West Indians identify as being people of colour and African-American.
But even as identity politics played a major role in the 2012 election, for West Indian immigrants, it did not come down to simply a question of race.
Conservative and Caribbean
Robert George, a Republican columnist for the New York Post, argues that the West Indian identity is instinctively conservative.
Many, in fact, are home- and business-owners, concerned about economic policy and high taxes.
And many agree with Republican views on social issues such as abortion and same-sex marriage.
Mr George cites examples of successful prominent West Indian Republicans such as retired Gen Colin Powell, the son of Jamaican immigrants, and Mia Love, the first black woman mayor to be elected in Utah. Her parents are Haitian immigrants.
He says his own view on entitlements was shaped by his Trinidadian mom.
"When I looked at how I was raised, by a single mother, how she worked hard to provide for us, and at the same time try to refuse things like public handouts, welfare, things like that," he says, "that thought process led me into conservative directions."
Social conscience
But David Hanniford, a Brooklyn real estate broker, originally from Jamaica, says being a businessman with some measure of conservative values does not conflict with his having a heart.
"I believe in social conscience, that you should try to help everybody," he told Caribbean Intelligence©.
"I think, for instance, health care should not be a luxury. We are the only country that doesn't have health care for all."
Mr Hanniford says he has voted Democrat for more than 20 years.
His reason this time around: "I am for ending the war, bringing home the troops from Afghanistan, and I support higher taxes for those making more than $250,000 a year."
But as far as he is concerned, the elephant in the room is immigration.
"It's a no-brainer," he says. "You have about 11 million people in limbo and because of politics, everybody is scared of it."
Republicanism and migration
The New York Post’s Mr George, who spent several years working with Republicans such as Newt Gingrich on Capitol Hill, admits that his party must to do more to win over non-white immigrants.
"The Republican Party has to be more open and inviting to immigrants," he says.
"It can't portray itself as the anti-immigration party when President Ronald Reagan passed two immigration amnesties and President [George W] Bush was pro-immigrant."
And the Daily News’s Mr Louis says immigration weighs heavier on West Indian voting decisions than any other issue.
He says it's not just about immigration policy, but also about the rhetoric.
During the Republican primary, candidates expressed a preference for legal immigration.
The eventual nominee, Mitt Romney, remarked that immigrants who could not find work because they have no documents would be forced to "self-deport".
"You might like what they [Republicans] are saying about same sex marriage and taxes," Mr Louis told Caribbean Intelligence©.
"But when you find out they want to exclude your family,” he adds, “you'd give it a second thought."
Christene Ross did not think Republicans deserved even a first thought this time around.
While she cares about jobs, taxes, spending and immigration, she also wants to see action on health care, foreign policy, global warming and co-operation between the House and Senate.
Tweet