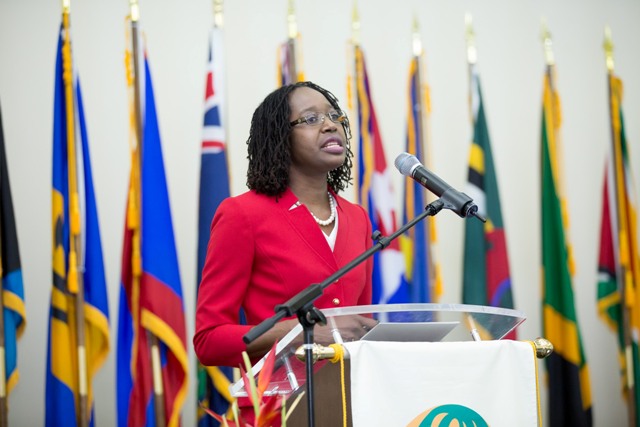 The Caribbean Community (Caricom), supported by the Caribbean Tourism Organisation (CTO), plans to appeal for compensation from the international community for the destruction inflicted on parts of the region by two Category 5 hurricanes in September.

“We must send a strong message that we can no longer ignore global warming and climate change,” Clarice Modeste-Curwen, Grenada’s tourism minister, told the opening ceremony of the CTO’s State of the Industry Conference (SOTIC) in Grenada.

She spoke of the region’s “minuscule contribution to global warming and climate change, while the impact on us is severe”.

She made special reference to the formula used by international agencies, including the World Bank, which excludes middle-income countries in the Caribbean from development assistance.

“As we all know, one unfortunate weather event can wipe out a considerable portion of the GDP of any member state. The international community therefore must recognise our unique situation in this regard and fashion developmental support accordingly,” she said.

“Has to be compensation”

CTO Secretary-General Hugh Riley said the world had to understand the reasons behind the calls for global support.carbon footprint is smaller than the rest of the world. There is a very concerted effort to make sure that the international community gets that message,” he told Caribbean Intelligence© at SOTIC.

Asked if the CTO would approach Caricom on assistance to revive the tourism industry, he said: “We don’t need to make an overture to Caricom, the Caricom leaders are entirely on board with it.

“We are having that discussion today with our global partners. There has to be some compensation coming out of it, the details of it will come out of discussion.”

The effort is likely to have the support of the World Travel and Tourism Council (WTTC), says Helen Morano, senior vice-president of the WTTC’s Government and Industry Affairs.

Ms Morano told Caribbean Intelligence© she had “made a special note to pursue that as a form of advocacy”.

She noted that the destructive impact of climate change was also “a concern of the Philippines and they pursued it to be able to demonstrate that they are not a contributor to climate change to the degree that they have been impacted”.

Given the severe damage caused by hurricanes Irma and Maria, the CTO has dramatically reduced its projections for growth in the tourism industry in 2017 from the original figure of 2.5% to 3.5% to growth measuring between 1% to 2%.

The decline is expected to continue into 2018, says the chairman of the CTO board of directors, Joy Jibrilu, who is also director of tourism in The Bahamas.

The two Category 5 hurricanes led to the loss of 37 lives and disrupted the livelihood of about 130,000 people in the Caricom region. Destruction and damage to property and infrastructure, including hotels and guest houses in the nine countries that hurricanes Irma and Maria blew through with winds gusting to record levels of 185 mph, ranged between “devastating and extensive”.

All these are details from a report delivered to the annual SOTIC conference by Elisabeth Riley, deputy executive director of the Caribbean Disaster Emergency Management Authority, CDEMA.

Preliminary figures indicate that the financial and economic losses will run into billions of dollars yet to be assessed and quantified, says Dr Justin Ram, girector of the Economics Department of the Caribbean Development Bank (CDB).

Dominica, as a nature resort, lost 95% of its vegetation. Barbuda, deeply dependent on tourism, suffered serious damage to its three major hotels. There is little indication so far of reconstruction work and the island has been cleared of its 1,800-plus residents.

The CDEMA’s Ms Riley told reporters that in the British Virgin Islands, 95% of the coastal properties in the north and west areas of the major island, Tortola, had been destroyed or severely damaged.

She estimates that Dominica's loss will wipe out more than 100% of its GDP – in other words, more than a year of the island’s usual income.

CDB economist Dr Ram says that the expected economic impact on the tourism dependent economies of the region as they look to recover for the seasons to come is quite challenging.

"We anticipate a slowdown in visitor arrivals as some ports and hotels are repaired and travel plans are re-routed," he told reporters at the CTO conference.

The Trinidad and Tobago-born economist estimates that if 1% of the more than 22 million visitors who came to Caricom countries in 2015 take their vacations elsewhere next year, the loss to the region's tourism economy will amount to US$137.8m.

Dr Ram estimates that the region will lose US$48.2m of projected 2017 revenue from the tourism industry and will lose another $213m over the long term.

One of the major lessons of this most ferocious hurricane season, says the CDEMA's Ms Riley, is that while the destruction to property was widespread, many quality buildings were able to withstand the force of the Category 5 hurricanes.

The authority strongly advocates physical planning and building regulations to be established, implemented and monitored to withstand hurricane force winds and rains.

She said, while a few governments had started the process of building low-cost homes, the pace of the effort needed to be quickened.

Ms Riley said that regional governments, the private sector and the hotel industry "should maximise the opportunity produced by the hurricanes to rebuild property and infrastructure".

She says the continuity of business operations after a destructive hurricane season such as this one is vital for the survival of the people of the region.

For the immediate reconstruction effort, the CDB, with its responsibility for development in its member states, is offering US$200,000 emergency relief grants and US$750,000 for immediate loans. The grants and loans will assist member countries to purchase relief supplies, water and sanitation services, roofing materials, shelters and community buildings.

The CDB’s Dr Ram says that on a long-term basis, the CDB is also prepared to lend money to help countries reduce their vulnerability to future disasters and to restore key economic sectors.

The CTO and the Caribbean Hotels and Tourism Association are getting together to launch an advertising and marketing campaign aimed at source markets for tourists in North America and Europe. The message is that the majority of tourism destinations in the region have not been damaged by the hurricanes and that “the Caribbean remains open for business".

CTO Secretary-General Hugh Riley says the associations are aiming to spend about US$10m on that information campaign.