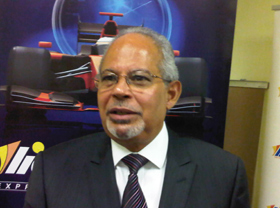 By Tony Fraser writing from Antigua

The vast majority of Caricom governments that now get the services of the regional airline, Liat, to move their populations around the region, do so by “drinking its milk, using a straw through the fence,” says Liat chairman Jean Holder.
In his view, these governments should now come inside the fence and purchase equity in the airline, to allow it to replace its ageing fleet of Dash 8 aircraft.
“It is time to feed the cow,” says Dr Holder, quoting the President of the Caribbean Development Bank.
He points out that only Barbados, Antigua/Barbuda and St Vincent and the Grenadines own shares in the airline.
He adds that they are the only ones that “come to its aid when it is in financial difficulties”.
“This cannot continue,” said a determined Dr Holder at a Liat presentation held in Antigua.
New planes
One shareholder, St Vincent and the Grenadines, through Prime Minister Ralph Gonsalves, has already committed to putting US$1.3m towards plans to buy six ATR 42-600 aircraft from the French-Italian ATR manufacturer.
At the same time, Dominica and St Lucia have indicated an interest in taking a stake in the airline. The aim is to back a reorganised and reduced executive management in its efforts to purchase 50-seater turbo-prop aircraft.
A team led by Liat chief executive Ian Brunton is scheduled to meet Trinidad and Tobago’s Finance Minister, Larry Howai in Port of Spain, to seek the twin-island republic’s participation in the investment project.
One major objective of the new business plan, released by Capt Brunton at a news conference at Liat’s Antigua base, is to replace the current fleet of aircraft, which have been in service for as long as 19 years.
“These new aircraft are expected to increase the efficiency and reliability of the schedule,” says Capt Brunton, who is a former president of Trinidad-owned Caribbean Airlines.
He took up the job at Liat in August 2012.
Shop Amazon Music - Buy a CD or Vinyl Record, Instantly Get the MP3 Version for FREE

Maintaining older planes
A big drag on Liat’s finances, and one which hampers its ability to stay on  schedule, is the servicing of the old fleet of aircraft.
Capt Brunton says servicing the existing fleet amounts to 35% of Liat’s operating costs.
The projected cost of the new fleet is US$105m, of which $29.1m is expected to come from new equity stakes, to be taken both by existing shareholders and from other Caricom governments.
“The rest of the funding is to come from a long-term commercial loan and the sale of existing assets,” says the Liat CEO.
Those assets, mostly the airline’s older planes, are expected to bring in $24m.
Regional maintenance hub
To generate future revenue, the Liat CEO says, ATR has pledged to help Liat establish a maintenance and repair hub in the region.
This will service the turbo-prop aircraft operating in Latin American and the Caribbean.
“This initiative will be a huge boost to the employment opportunities and human resource development of the region, whilst at the same time providing an increased revenue stream for Liat,” says Capt Brunton.
Liat also intends to increase its “load factor” – the number of seats occupied on its planes – to 75%. At present, only 54% of its seats are actually sold.
New destinations
In addition, Liat has a medium-term plan to fly into new markets such as Punta Cana in the Dominican Republic, Panama, Jamaica, Aruba and Haiti - markets with a combined population of 26.3 million people.
The Chief Commercial Officer of Liat, Leesa Parris-Rudder, told Caribbean Intelligence© that feasibility studies had been done to determine the viability of the projected routes.
She admits that there is need for “further research before a definitive decision can be made”.
The airline, which has a revenue base that varies between US$111m and $129m annually, is projecting an EC$7 million (US$2.6m) profit in 2013.
This would increase to more than US$15m over the medium and long term.
As part of the plan to turn around the airline, which lost a total of US$15.9m during 2010 and 2011, Liat has already started to “adjust” the number of flights on “social routes” (subsidised routes) into eight unnamed countries which are now heavily subsidised by the airlines.
Capt Brunton told Caribbean Intelligence© that the airline had started talking to the authorities in the eight countries in which the subsidy on the flights reaches as high as 35%.
Unlike all the other national airlines operating in the Caribbean, “Liat does not enjoy a subsidy paid up front,” says Dr Holder.
“The airline stays alive by negotiations with its bankers, the skills of its management, and being forced to charge the customer a level of fares that meet its costs.”
Drop some routes?
“Liat is not making any demands that are not being made by all other carriers flying into and around the Caribbean,” says Dr Holder.
He related past experiences of governments, heavily dependent on tourism, paying American Airlines up to US$1m a year to keep flying into their countries.
“But everyone expects Liat to provide a social service.”
Asked whether Liat’s management had the political will to pull out of the loss-making routes if the governments of those countries did not finance the subsidy, a defiant Dr Holder told Caribbean Intelligence©: “We will see.”
On the same question, Capt Brunton told Caribbean Intelligence: “We have begun to engage those countries.”
He listed the other challenges as subsidising the 39 flights on the eight routes, higher fuel costs, a major reduction in passengers on the 21 routes flown by Liat, high labour costs and “astronomical” taxes which average between 30 to 50% of the cost of the ticket to passengers.
“The capital investment now needed will be a lot less onerous if it is shared among those for whom Liat provides services every day,” says Dr Holder.
As Liat starts to make plans for its future, one of its main rivals - American Eagle - will complete the pull-out from its Puerto Rico hub by March 2013 – a move expected to leave some gaps in the short-hop island-hopping Caribbean market.
As American Eagle wraps up its operations, its parent American Airlines has said it is in discussion with regional destinations about a future replacement plan as it sets out to service the Caribbean from its Miami hub.
Tweet