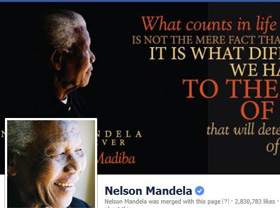 "On behalf of the government and people of the Republic of Guyana and on my own behalf, I express sincere condolences on the passing of former President Nelson Mandela. Nelson Mandela was a giant in defence of human rights and for a free and just society, not only for his beloved South Africans, but for the oppressed the world over. The world is much poorer after his passing for he was one of the most outstanding statesmen of all time."

"Mandela is not only the Father of Democracy in South Africa, it is the symbol of democracy and like any symbol, it is not dead. It is present in all of us and guide us by his lifestyle, his courage and faith in the true struggle for equality between men, races and Nations,"

"Nelson Mandela is dead at 95 years of age. He was an African Revolutionary; an Iconic Global Fighter for Equality, Justice, Peace, and Democracy; a World Statesman of the highest quality; former President of South Africa and Founding Father of his Nation; an Exemplary Family Man; a Most Extraordinary Human Being and Humanist; and a Man after God’s Own Heart. He remains an example to emulate, a continuing inspiration for service to humanity, and a leader to follow.

There are some forces internationally which seek, selectively, to rewrite Mandela’s life story in their own image and interest. Those, for example, who labelled Mandela and the ANC as terrorists during the epic years of anti-apartheid struggle now want to make it appear that it was the goodly work of a few former apartheid apostles who experienced a Damascus conversion and the “constructive engagement” of the governments of the USA and some European countries, were principally responsible for apartheid’s demise. Such persons attempt to write out of the real story the outstanding solidarity contributions to the liberation struggle and the ANC from, for example, ordinary people of all walks of life internationally, the Soviet Union, Gadhafi’s Libya, and the defeat of the racist South African army at the epic battle of Cuito Cuanavale at the hands of the Cuban fighters, the Angolans, and ANC patriots. These very selective historians down-play the militancy of the revolutionaries in South Africa, including those in the joint endeavours of the ANC and the South African Communist Party. We must be aware of these revisionist, self-serving history-tellers, particularly in sections of the established western media.

Many of my generation were particularly moved by Mandela’s fortitude, humility, and high principle, to offer support for majority-rule in South Africa and for his release from jail. We formed African Liberation Committees and participated accordingly in political activities with these objectives in mind. At Mandela’s death we remember the contributions of all these persons. Especially, too, we remember and celebrate the huge sacrifices of Mandela’s comrades-in-arms such as Oliver Tambo, Giovanni Mbeki, and Walter Sisulu, as well as younger warriors of blessed memory such as Steve Biko. We remember Joe Slovo and his wife Ruth First and other committed compatriots, who were not Black African, for their immense sacrifices and love of freedom.

We are fortunate to have lived during the lifetime of a colossus, Nelson Mandela, our extraordinary Madiba.

Mandela’s global stature was reflected, in part, by the esteemed accolades he received world-wide, among them being: the Nobel Peace Prize, the Soviet Order of Lenin, the US Presidential Medal of Freedom, and the Bharat Ratna.

On behalf of the government and people of St. Vincent and the Grenadines, I express profound condolences to the government and people of South Africa, to Madiba’s widow, Graça, to his former wife, Winnie, to his children, grandchildren and great-grandchildren, and to his entire family and close friends. At this moment of profound sadness, we are at one with the world in celebrating Madiba’s extraordinary life. The entire world, including his former foes, rightly claim him as their own.

May Madiba’s soul rest in peace, and may light perpetual shine upon him."
Tweet
Caribbean Intelligence© provides a one-stop shop for the Caribbean and the Diaspora online. For more on life for Caribbean people abroad, check out our Diaspora pages. For daily news round-ups and in-depth stories, visit our News Analysis pages.
Related articles
Nelson Mandela - A friend to Cuba