A Dominican dream put on hold 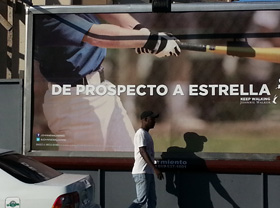 While the government in Santo Domingo drags its heels, many Dominicans of Haitian origin fear being stripped of their citizenship because of a 23 September court ruling by the Dominican courts, which was made retroactive to 1929.
Jabari Fraser travelled to the Dominican Republic and met some of those affected by the ruling, which could strip them of their Dominican citizenship because of the status of their Haitian parents or grandparents.
Tweet
“At one point I was training at the Olympic Stadium, but since this problem presented itself, I stopped training. They wanted me to present a copy of el acta de nacimiento.”
With a tinge of sadness, tempered by reality, Dierdito Exilien tells me of the dream he once had to be “the next big thing” in Dominican and Major League béisbol, the next Sammy Sosa.
But the 6ft-plus tall, sturdily-built Haitian-Dominican had that dream rudely shattered when Judgement 168/13 put an end to his development as a professional athlete, as it has done to other blossoming pitchers and bateadores.
“Because I am the child of an immigrant, a Haitian immigrant, they told me that if I did not have a copy of the acta, I could not stay in the school.
“It was an athletics school, run by the Ministry of Sport. I had to stop playing béisbol.”
Human rights
I met Dierdito sitting on a table in the open yard of Centro Bonó, an NGO in Santo Domingo where Haitian-Dominicans meet every fortnight to support each other in their shared hardship.
“I believe the sentence is something that goes against the constitution of our country, against the Universal Declaration of Human Rights, and violates many other universal rights that we have as human beings,” he said.
His red polo shirt is tucked neatly into his pants and his bag is on both shoulders as he gets ready to set off for a distant Batey (a Haitian immigrant community).
Sitting up when asked about his nationality, he says with confidence:  “This is my country. I was born here. I believe this sentence is not constitutional as they like to say. It is anti-constitutional.”
Court ruling
Stories of Judgement 168/13 have been bombarding Dominican newspapers and the agendas of Caribbean NGOs for the last few weeks, but what exactly is it?
As is now clear, it is a hotly contested legal ruling that could render approximately 250, 000 individuals stateless. At least 200,000 of those are first, second and third-generation Haitian-Dominicans.
According to those who are in favour of the ruling by the Dominican Constitutional Court, it is absolutely necessary to maintain order, as it simply seeks to reinforce the requirements of Dominican nationality and get a headcount of the number of people who do not meet those requirements.
At Centro Bonó, the meeting of Haitian-Dominican youth goes on a little longer than usual as they explain their position to this non-Dominican journalist.
They all hold up their cedulas, birth certificates, Dominican secondary school certificates, anything to show that they have spent all their 20-something years on the Western side of Hispaniola.
The bright, colourful backdrop of murals of Haitian-Dominican life, painted by grafiteros at Centro Bonó, stands in sharp contrast to their sombre mood.
Backing the ruling
It’s also a far cry from the blue-and-white walls of the media room of the Fuerza Nacional Progresista (National Progressive Force), one of the country’s main political parties.
With party insignia and watch words of Paz, Justicia y Libertad behind, Pelegrín Castillo welcomes various media crews coming to interview him.
He offers the visiting journalists water and coffee, eager to give his opinion and that of the Dominican Committee for International Solidarity with Haiti, of which he is the founder.
The party, established in 1980, has a centre-right political philosophy.
“The Dominican Republic is being accused of ethnic cleansing and of perpetrating civil genocide, of being a state that encourages xenophobia and racism,” he says.
“The only thing that they are yet to accuse us of is having chemical weapons or weapons of mass destruction. That is the only thing that is missing.”
Pelegrín Castillo has political pedigree. He is the first vice-president of the FNP, the son of its founder. He has been a member of the Dominican parliament since 1994.
He is also one of the more outspoken politicians in favour of Judgement 168/13 of the Constitutional Court.
He believes the judgement is “correct and responsible” and says the Constitutional Court has given the state the guidelines for putting the Regularisation Plan into action.
He believes it gives the state the opportunity to do something that is very important: clean up the civil registry.
“It is no secret that, as revealed by the president of the central electoral board, the Dominican civil registry has been penetrated by fraudulent practices,” he says.
“They are wrongful and irregular practices which have allowed many persons to appear in the Dominican registry without being Dominican.”
He says this does not apply only to the children of Haitian nationals, but also to “international mafiosos, including persons from the Far and Middle East”.
“So it is not only a migration issue, but also a national and international security issue,” he says.
“At one point I was training at the Olympic Stadium but since this problem presented itself, I stopped training. They wanted me to present a copy of El acta de nacimiento.”
Legal side
Mr Castillo is not the only member of the legal fraternity who believes the Haitian-Dominicans do not have much claim to Dominican citizenship.
Dr Juan Miguel Castillo Pantaleón is one of the country’s most in-demand attorneys.
As his loud tenor voice booms out an informative, hour-long lecture in Dominican law, he explains that, without laws and proper enforcement, there would be chaos.
He says there are two categories of individuals who enter the Dominican Republic: immigrants and non-immigrants.
He says non-immigrants, according to the law, must be up front and state that they do not have vocación de permanencia, the right of permanent residence.

Dr Castillo Pantaleón pulls from his hemispheric legal knowledge and says: “I’m quoting from Article 20 of the Convention on Human Rights, regarding the right to a nationality and there are three principles: all persons have the right to a nationality.
“A person has the right to the nationality where one was born, if he or she does not have the right to another; and thirdly, a person cannot be a private.
“That is not a nationality. Children of Haitians have the right to the Haitian nationality.
“The Haitian constitution clearly establishes the right to nationality through origin.”
Other countries, he says, “don’t understand what offends us when they call us racists. When someone calls a Dominican a xenophobe, it offends us. How could they say, ‘Oh, it is because they are black, we don’t want them.’”
A Caribbean issue
Another academic, Dr Andrés Mateo, dean of general studies at Universidad Apec in Santo Domingo, believes Caricom leaders have an essential role to play in denouncing the ruling.
“This is without doubt something that affects the entire region,” he says. “I hope that by December there will be another resolution to this human, cultural problem.
“We are thankful Caricom leaders [PJ Patterson, former prime minister of Jamaica and Irwin La Roque, secretary general of Caricom] have spoken out.”
Of course, being the old city that Santo Domingo is, many citizens boast that the large, waterfront capital has one of the region’s first streets, as we know them in the Americas: La Calle de las Damas.
So there was no better place to go for opinion than the streets, to hear from the typical Dominicano.
Demetrio, a taxi driver in the city, tells me: “The judgment is fair. What is happening is that many people want to see it from the Haitian perspective and that cannot be.
“The country has to regularise all of the foreigners there are, to be able to know how many illegal immigrants and foreigners there are here.”
A few metres away, Juan Felix takes a break from a vigorous game of checkers in Plaza de Santo Domingo.
“That was a judgment given by a constitutional court,” he says. “No person or country, far less a foreigner, has the right to question a judgment given by a constitutionally established court.”
Thumping one of his pieces to the board, he says with indignation: “This is a free and sovereign country. Nobody has any business interfering with what we do. Nobody.”

Participating in a pan-Caribbean pastime enjoyed by English and Spanish speakers alike, Arebar Reyes slams down his dominos and shouts: “Those persons who are legal citizens, even though they are children of illegal citizens, are really Dominicans.
“I do not agree with the deportation of someone who does not know anything about Haiti, simply for being the child of a Haitian. I am against that, because they only really know the Dominican Republic.”
Take ‘em to Church
If the city of Santo Domingo desired to conceal her age, the ornate, yet fragile early Spanish colonial architecture would give the game away.
La Catedral de Santo Domingo stands majestically at the heart of the Colonial Zone in the capital. While the stone walls that have stood there since 1512 may look weak, they are still quite solid and all that the Catholic Church there stands for is still very much present.

The Church has mixed positions on the issue.
Monsignor Nicolás de Jesús Cardenal López Rodríguez has said no international body or country has any right to meddle in the affairs of the Dominican Republic.
In October, he called members of NGOs who have been campaigning against the ruling “plagues, loudmouths and liars”.
“They have been sent here and paid to discredit the country and the Constitutional Court, which defines who a Dominican is or is not,” he says.
However, his is not the only such voice from the Catholic community here, as other priests have spoken out against the ruling.
No certificate, no certification
Esteffanie Feliz Pérez is a Haitian-Dominican who has also had her life put on pause because her birth certificate is not recognised.
“I have not been able to begin university, because of the Sentencia.
“Now, my life has been suspended because really, my life project has been paralysed and I still have not been able to start university.”
At 23, she says it has been five years since she completed her liceo (secondary school certificate).
“My dream was to become a social sciences teacher and now I cannot study. It is something that has me in a tough place emotionally, even in depression. It has been a hard blow.”
Like Dierdito and Esteffanie, most of the other young Dominicanos at Centro Bonó have had some one of their dreams cut short for now.
And as if it were on some sort of cue to expunge the negative energy of discrimination, they began drumming on the table, whistling and chanting for the one thing they all yearn for.
To be what they describe as “Reconocidos! Reconocidos! Reconocidos!” “Recognised! Recognised! Recognised!”
Tweet
For more news on Caribbean Intelligence and for our regular twitter news feed, check out our news analysis page.