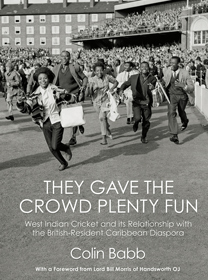 Cricket, lovely cricket - the British diaspora support for the Windies

Athlete of the Year

Caribbean gold medal athletes have made a good showing in the shortlist for the title of 2012 World Athlete of the Year.

A panel of athletics experts chosen by the International Association of Athletics Federations (IAAF) has selected 10 men and 10 women candidates.

On the women's shortlist is Jamaica's Shelly-Ann Fraser-Pryce, who this year became the first woman to win gold in the 100m at two Olympic tournaments in a row.

The current stage in choosing the winner involves an email poll from the World Athletics Family - IAAF Council and staff members, IAAF federations, top athletes and members of the international press.

They have until the end of October to cast a vote for the three male and three female finalists.

The final choice belongs to the Council of the International Athletic Foundation and will be announced at a special ceremony in Barcelona, Spain on 24 November.

At the start of this week, Bolt and Blake received their national honours during the annual Heroes Day celebrations in Kingston, which brought together the country's Olympians and Paralympians.

Jamaica's team members were feted, celebrated, and honoured in style with a musical tribute befitting of heroes at the country's National Arena on National Heroes Day on Monday for their achievements at the 2012 Olympic Paralympic Games in London.

Prime Minister Portia Simpson Miller presented over 50 athletes who competed in both games with monetary rewards during a concert which featured the likes of musical legends Marcia Griffiths and Freddie McGregor, and more recent heroes such as Beenie Man and Konshens.

Olympics 100m gold medallist Shelly-Ann Fraser-Pryce said she would be donating her one million Jamaican dollars to her alma mater (Wolmer's Girls School) as well as her church.

The concert marked the end of a two-day celebration of the athletes for their performances at London 2012.

The events began on Sunday with a church service at the East Queen Baptist Church in the capital, Kingston, followed by a cocktail reception at Jamaica House on Sunday evening.

On Monday, a newly installed marble headstone was unveiled at the gravesite at the National Heroes' Park of Jamaican track and field legend Herb McKenley who died in 2007.

The exchange of fire between rum companies and associations in the Caribbean continues to rumble on.

It began over the summer, when the West Indies Rum and Spirit Producers Association (WIRSPA) challenged the US subsidy on rum produced in the US Virgin Islands and Puerto Rico.

In the latest development in the rum industry’s battle for markets, Puerto Rican distiller Serralles has filed a federal lawsuit against Diageo North America.

Serralles is claiming that Diageo failed to pay or accept some of the gallons of rum it had originally agreed to buy.

The Puerto Rican distiller accuses Diageo of violating its agreement, which had been meant to cover any possible shortfalls in production for the American market at Diageo's new plant in the US Virgin Islands.

Diageo had moved production of its Captain Morgan rum from Puerto Rico to the US Virgin Islands.

Diageo has responded, saying that it honoured all its agreements.

The West Indies win in the World Twenty20 (T20) tournament on 7 October in Sri Lanka did more than boost the spirits of Windies supporters.

It also boosted interest in the Windies' glory days, as broadcaster and writer Colin Babb has found out.

Colin Babb, the author of They Gave The Crowd Plenty Fun, which was published earlier this year, suddenly found himself in demand to talk about the concept of a winning Windies and the team's relationship with the Caribbean Diaspora in Britain.

"One of the questions (I'm asked) is whether the West Indies winning the T20 will lead to further success," he told Caribbean Intelligence©.

Colin's book deals with how "cricket and the West Indies continued to be a site of self-belief and identity" for people from all Caribbean backgrounds in the 1950s, 60s and 70s.

It also notes how that the make-up of that diaspora has evolved over the years, with increasing numbers of Caribbean people choosing North American to British migration.

"Defeating England at cricket and rejoicing in pan-Caribbean victories over representatives of old Empire has become drastically less important to a diaspora that has evolved a new social, creative, cultural and political identity," the book observes.

Colin, whose roots are Guyanese and Barbadian, describes a visit to a Guyanese takeaway in south London where the clientele were half and half: those over the moon about the T20 victory and those who believe that the "glory days" will never return.

His book looks at the amount of people returning to the Caribbean after retirement in Britain and a growing confidence in the sense of "Britishness" for a third and fourth generation person of Caribbean origin.

"The community has changed," he explained.

"Immigration from the Caribbean to Britain has decreased… and it's not even being topped up by new migration."

He has found so-called Caribbean cricket clubs around the UK now have players from India, Australia and other people living in Britain.

"It really was symbolic thing when the Windies beat England in England."

"That connection with cricket is dying," he said.

Colin points out how cricket had brought out a pan-Caribbean solidarity for the Windies, bringing together Bajans, Guyanese, Trinidadians and Jamaicans behind one side - a phenomenon he describes as "migrant unity in exile" and "the diaspora collective".

[They Gave The Crowd Plenty Fun: West Indian Cricket and its Relationship with the British-Resident Caribbean Diaspora by Colin Babb.
Published by Hansib Publications: £8.99. ISBN: 978-1-906190-55-2.]
Tweet